My Interview With Jesse Jackson On The 9th Circuit's Recall Decision

I had a chance to speak briefly with Jesse Jackson after his speech today.

Lisa Rein: "Do you think the 9th Circuit Court of Appeals Decision about the Recall election is gonna hold?"

Jesse Jackson: "It's difficult to say, only because this Supreme Court did an extrodinary thing in 2000. They stopped the vote determining the outcome of the presidency. So if they would do it for a President, they might do it for a Governor. You just don't know. So we must be prepared."

"I feel that momentum is building. People are finally beginning to see the danger of this act of disenfranchisement and destabilization. Whether it's Prop 54 or the Recall. Both are of the same ideology. They seek to disenfranchise and to destablize and people must fight back. If we fight back, we'll win." 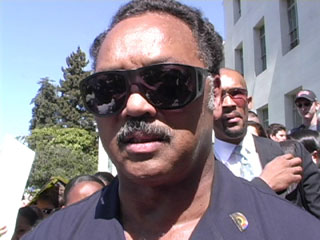