Robert Novak On Meet The Press - What He Was Told By A Senior White House Official About Joseph Wilson's Wife Being A CIA Agent, Why He Printed It, And Why He Won't Reveal His Source

Well I certainly understand why he can't reveal the source. There's no reason to throw journalistic ethics out the window completely.

This entire situation provides a perfect demonstration of how backstabbing this Administration can be. Novak is one of the few journalists that has stood by the Shrub and his cronies and consistently defended them through all of their folly. Now he has been chosen as the sacrifical lamb to "leak" a story that could potentially land him in jail. This Administration even screws over their "friends."

It sure seems like the "senior official" interviewed by Novack knew exactly what he was doing. He gave Novak classified information and then sort of half-heartedly asked him not to print it. This is a classic example of a premeditated "leak." Novak says that he tried to downplay the information by burying it in the sixth paragraph of the article. He also claims that he uses (or "misuses," by his own admission) the word "operative" all the time, and that "oops" this time he was referring to a "real" CIA operative. (Not sure what he "really" means when he uses the word "operative" incorrectly.)

You can check it out for yourself. Sorry I couldn't bring you the entire thing. My camera would not cooperate. (I really have to send it in for servicing!) I kept letting it cool down before I tried again, and did this enough times so I could get the important part at the beginning.)

This is from the October 5, 2003 program of
Meet The Press (hosted by Tim Russert).

I've made it available in its entirety and as two smaller clips.

Note: the interview with Joseph Wilson from the same program is also available. 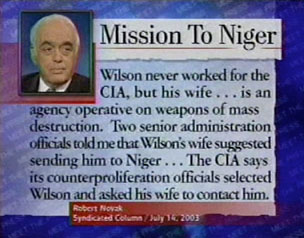 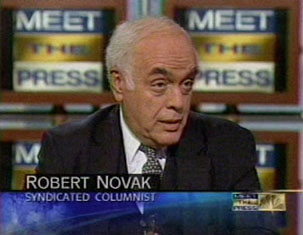 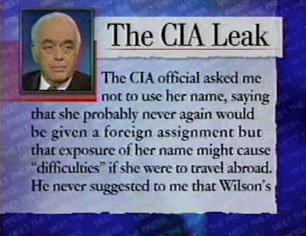 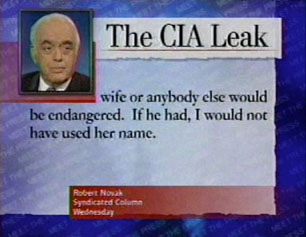 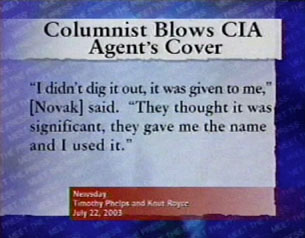 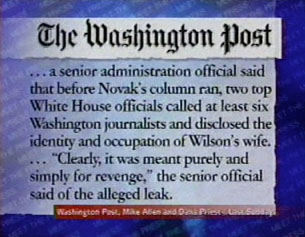