Jon provides some nice commentary and news clips regarding the controversy over at the Alabama Supreme Court where Chief Justice Roy Moore was removed from office by the Alabama Court of the Judiciary (Vote 9-0) after he refused to remove the ten commandments monument from the State Supreme Court. 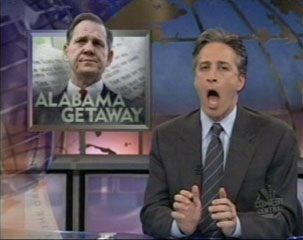 Could you post the vid of when the White House gets drilled over over the Bush AWOL issue.