The Repubs' latest fabrication is that Roosevelt himself personally endorsed private accounts, and presumably the cuts in benefits that go with them.

According to Roosevelt's grandson, James Roosevelt Jr., who is a former Associate Commissioner on Social Security, the quote was taken completely out of context. Keith Olbermann had him on the show to clear things up. The two of them go over the quote in question with a fine-toothed comb and provide the larger context in which it appears.

(see below for full quote within context)

Even a simple reading of the quote makes it clear that Roosevelt envisioned private accounts in addition to regular benefits, for those who could afford to invest in them, so they would have additional benefits later. (Not as a replacement for the current system.) 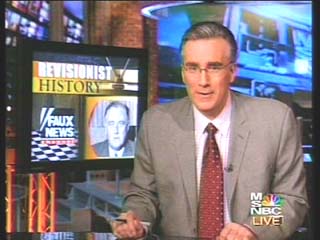 Transcription:
President Franklin Delano Roosevelt, father to the New Deal and, at minimum, mid-wife to the Social Security system, would have endorsed President Bush's plan to partially privatize it. Our third story of the countdown, that is the claim anyway of at least three conservative commentators and several Republican congressman, but it turns out, those guys pretty much just made it up...

At the risk of doing a little too much reading, just to put it on the historical record, let me read the entire quote from which those quotes were pulled (portion of quote misused by Brit Hume and others is in italics):

"In the important field of security for our old people, it seems necessary to adopt three principles. First, non-contributory old age pensions for those who are now too old to build up their own insurance. It is of course clear that perhaps 30 years to come funds will have to be provided by the States and the Federal Government to meet these pensions. Second, compulsory contributory annuities which in time will establish a self-supporting system for those now young and for future generations. Third, voluntary contributory annuities by which individual initiative can increase the annual amount received in old age. It is proposed that the Federal Government assume one-half of the cost of the old-age pension plan, which ought ultimately to be supplanted by self-supported annuity plans."