So a lot is going on lately. There's so much going on, that I don't know where to begin in explaining it. So I'll just start putting stuff up...

It's all good, in different ways. On the creative musical and video front, I've been preparing a lot over this last month that I'm ready to start rolling out over these next few weeks. On the Dabble front, we're ready to roll out some new features and are adding a ton of new content collections from all sorts of cool websites. On the Wide Hive Records front, we have a number of new releases, and I sing background vocals on three different tracks on one of them: Salsa Blanco.

On the political front, I finally made time for a political fundraiser last Friday night, to meet a number of Congressional Candidates in this upcoming election, and I was instantly rewarded when none other than Robert F. Kennedy Jr. stopped by to say hi. 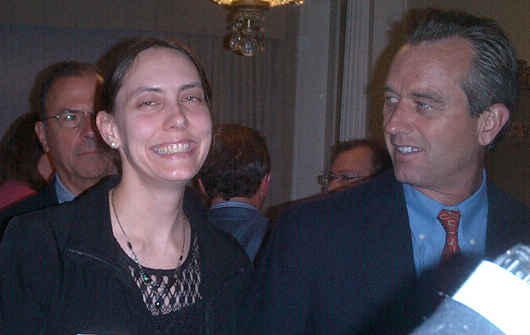 I'm quite a fan of Bobby's lately, as he has been one of the few people to speak out about the 2004 Election irregularities in two different Rolling Stone articles (Was the 2004 Election Stolen? and Will the 2006 Election Be Hacked?), and on numerous television programs.

It was great to be able to hand him a copy of Stealing America. (There are a several clips of him included in the film.)

It was also a big reminder of the unprecedented attack on the environment by the Bush Administration - another critical reason why we have remove this administration and all the professional crooks that are running it at our earliest opportunity.