Bill Moyers NOW did a great story Friday night (July 25, 2003) about what's been going on over on Capitol Hill the last two weeks regarding the FCC's New Media Ownership Rules. Rep. Richard Burr (R-NC) and Rep. Frank Wolf (R-VA) and Rep Zack Wamp (R-TN) are three of the many Republicans that have decided to go against the wishes of the White House and voted 400 to 21 in favor of reversing the new rules. Rep. David Obey (D-WI) was the Congressman who created the Bill that was passed last week by the House.

I transcribed this from the video:


The forces in favor of big media were gathering. Just hours before the vote on Obey's Amendment, seventy General Managers from television stations owned by the four networks met for breakfast on Capitol Hill. They had been recruited by their parent companies to come to Washington and lobby congress to support the FCC. Curiously, with all these TV executives in one room, only our camera was there to record it.

And down in the halls, the Republican Congressman were being pressured to support the new FCC rule change. Especially from their own leadership.

"I was heading for an elevator that Chairman Billy Tauzin was getting on. I sneaked around the corner and went down three flights of stairs to avoid the elevator ride with Chairman Tauzin, because he would've had me boxed in that elevator and I was able to stand my ground and vote my conscience without, face to face, having the kind of pressure that he would have exerted." -- Rep Zack Wamp (R-TN).

"I didn't get elected here so I can be a potted plant and I don't really care what the White House thinks about some of these issues. My conscience is what I will report to when I reach the end of my days. Not to anybody downtown." -- Frank Wolf. 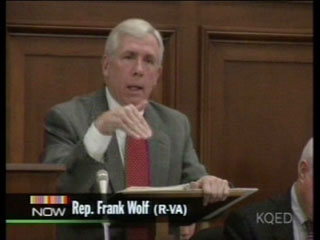 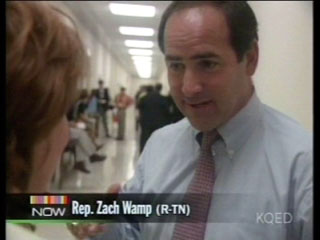 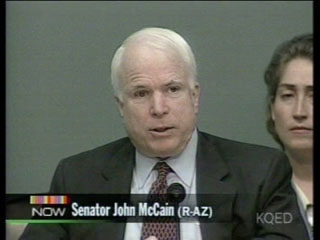 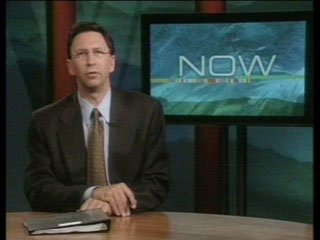 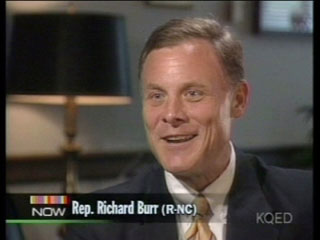 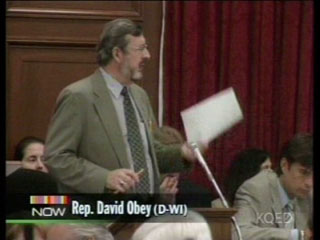 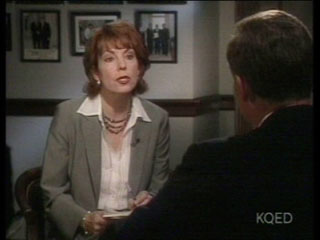 Here's the official scoop on this episode:

As you already know, on Monday, June 2, 2003 the FCC relaxed decades-old rules restricting media ownership, permitting companies to purchase more television stations and own a newspaper and a broadcast outlet in the same city. More than a year before the FCC decision, NOW with Bill Moyers reported on the dangerous results of media deregulation on the radio industry, and since then, armed with its journalistic mission to shed light on issues confronting our democracy, NOW has remained among the only voices on American television covering media deregulation. While the series may have helped to bring wider public attention to the issue, it was organizations like yours that organized a massive public response by mail, telephone, and e-mail to the FCC.

This week, NOW will once more focus attention on the FCC's decision and on the machinations on the Hill, which could result in a the reversal of the FCC's new rule that allows the nation's largest TV networks to grow even bigger. It's a stunning political development that has made strange bedfellows of some Democrats and Republicans. I hope that you will be able to alert your members to Friday's edition of NOW (see program alert below).

This week Congress is moving towards reversing the FCC's new rule that allows the nation's largest TV networks to grow even bigger. The FCC's June 2 decision to further deregulate big media has made strange bedfellows of some Democrats and Republicans who fear that loosening media restrictions threatens Democracy. "I think we ought to err on the side of looking out for the American people, and not necessarily for the corporations who have the most to gain," says Representative Richard Burr (R-NC). With growing criticism of media consolidation from both liberal and conservative groups, will Congress roll back the new media ownership rules adopted by the FCC? On Friday, July 25, 2003 at 9 p.m. on PBS (check local listings), NOW continues its ongoing coverage of media consolidation by taking viewers inside the debate on Capitol Hill.