This was a classic appearance on The Tonight Show with Jay Leno. Looks like we've got Hollywood on our side!

Jay put together some hilarious clips (3 MB) of Dean as a street musician and Dean as Pete Townsend that are quite historical. One of them features Rob Reiner as a passer by.

Jay sure did his homework for this interview. We get to learn about how Howard decided to become a Doctor and how he managed to balance being a Doctor with his duties as Lt. Governor before the Governor died and he became the "big guy." We also learn about his favorite $125 JC Penny suit that he still owns to this day. 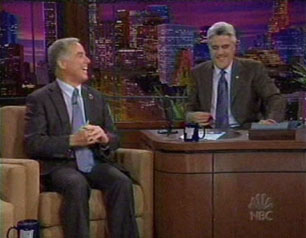 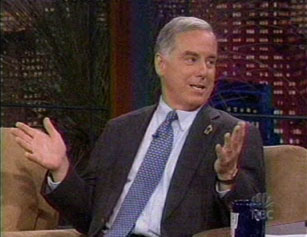 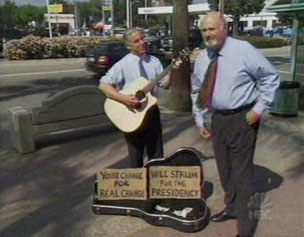 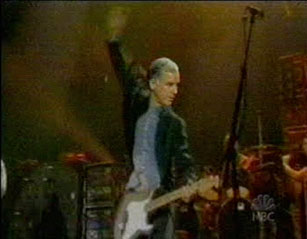 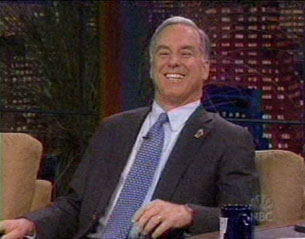 Long time reader, first time commenter. Love your site!! I've been volunteering on the Dean campaign since February. I hope a lot of Americans saw the show and understand how honest and refreshing Dean is.

Any secrets to getting the video off your Tivo? I've got a series 2 and hate having to dump to tape and digitize, but haven't found any way to get at the clips over the network.

As an american service man overseas, and a vermont resident, I find it hard to believe that you are smart enough to build a decent web page, but support Liberal ass wipes like Dean. We needed Dean in office like Clinton needs another Dick. I am a Bush supporter, and will be until the end. Liberal dumb asses talk about how men and women are dying in the middle east, trying to justify their "Causes" because of the "Soldures" over here. As a military member, I can tell you that I enjoy my job, and that if I hadn't been ready to fight for your freedom to support such douche bags like dean, I would have never enlisted. Thank you for letting me vent...
Thekingofmikes