This is from the December 22, 2004 program of
Countdown With Keith Olbermann.

The clip is only 47 seconds long, but it means a hell of a lot. I've transcribed the entire thing below, and Video and an MP3 file is also available.

I'll be posting more about the details of this tonight and all day tomorrow, along with an article that puts everything together in one cohesive post.

I'm doing this for everyone, of course, but I'm also doing it to make it easier for press folks in the mainstream media to cover these developments over this upcoming, critical week.

The situation seems a bit complicated, at first, and I found myself having to print out all of the articles and lay them out on my desk and read them over a couple of times to understand which names kept coming up, and why, and what seemed to be the important story to tell, which, as it turns out, is actually quite simple:

The Ohio Recount has been totally invalidated due to a combination of factors, most notably the obvious and incontestable recount machine tampering by a Triad employee.

Bush can't win without Ohio, so if the results are in question, the entire election is in question. (Final count: Bush: 286 Kerry: 252 - so Ohio's 20 electorates switching to Kerry would make the count Bush 266 Kerry 272.)

The Kerry-Edwards campaign is filing papers tomorrow to impound all of the recount equipment in question until the entire matter can be investigated in a timely manner.

Representative John Conyers (D-MI) and others are planning to challenge the election on January 6th, and they say that, this time around, unlike in 2000, they can get the support of one or more Senators to make the Challenge hold.


And although the race for president really is all but over tonight, in the state of Ohio, Senator John Kerry's legal team is filing papers in Federal Court, asking in effect that all of the evidence obtained during the recount be saved, and that the court move quickly to uncover the facts.

While Senator Kerry is still technically the third party in all of this, acting in support of the Libertarians and the Greens, the parties that officially requested the recount, the outcome affects him. Kerry's lawyer in Ohio, Daniel Hoffheimer, telling Countdown tonight that the Democratic ticket wants to make sure that things are done right:

"Senators Kerry and Edwards and very concerned that the law for conducting the recount should be uniformly followed. Only then can the integrity of the entire electoral process and the election of Bush-Cheney warrant the public trust." 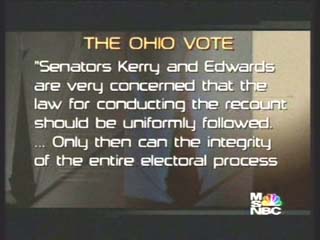 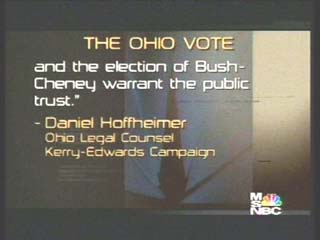 Wow! That's great. Thanks for keeping an eye on this stuff for us Lisa.