Matt Cooper Outs Rove On Meet The Press...And Nobody Cares?

So I'm so busy trying to not pay attention to Karl Rove on Meet The Press yesterday morning, that I don't bother to watch the rest of the show...

Where as, luck, or in this case, NBC, would have it, Matt Cooper apparently let the cat out o' the bag about Rove leaking Valerie Plame's identity. All casual and shit.

Then Gregory moves on to another topic...like nothing important was even said.

I wouldn't have even have known to go back and look at my recording if my trusty t r u t h o u t newsletter hadn't have informed me. 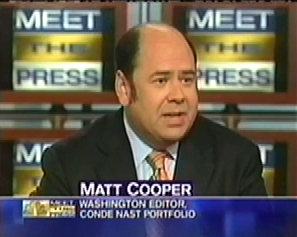 Gregory: Matt Cooper, let's pick up on an aspect of the interview with, with Karl Rove having to do with the leak case, the CIA leak case, that you were part of as well. And something that's very interesting, he, he went out of his way to say, "I would not have been a confirming source on this kind of information" and taking issue with, with Novak's testimony in his column that he knew who Valerie Plame was. He said he would never confirm that information. That's different from your experience with him.

Cooper: Yeah, I, I think he was dissembling, to put it charitably. Look, Karl Rove told me about Valerie Plame's identity on July 11th, 2003. I called him because Ambassador Wilson was in the news that week. I didn't know Ambassador Wilson even had a wife until I talked to Karl Rove and he said that she worked at the agency and she worked on WMD. I mean, to imply that he didn't know about it or that this was all a leak by someone else...

Gregory: Or that he had heard it from somebody else...

Cooper: or that he heard it as some rumor out in the hallway is, is nonsense.

Gregory: But he makes no apologies to Valerie Plame.

Cooper: Karl Rove never apologizes. That's not what he does.

Then Gregory just changes the subject..."Back to politics..."

I thought they were talking about politics...