This clip is a Dick Cheney classic.

This is from the September 14, 2003 program of
Meet The Press, hosted by Tim Russert.
(Link goes to a complete very incomplete transcript.)

Russert: "Were you briefed on his (Joseph Wilson's) findings of February-March of 2002?"

Tim Russert: "The CIA did." 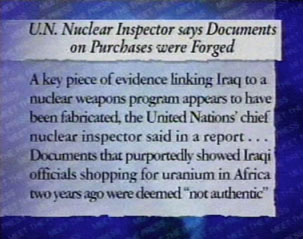 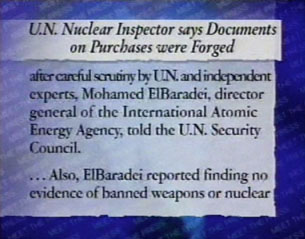 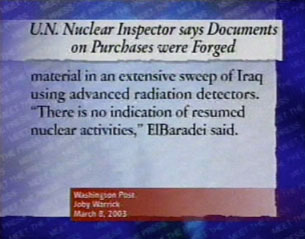 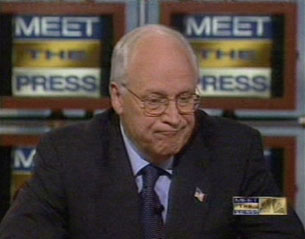 What a great clip! Keep up the great work Lisa.

At the end of the clip, he mentions that the UK parliament affirmed the nuclear weapons claims; yet I can find nothing to back this up. The BBC is covering the Hutton Inquiry in microscopic detail (see attached url), but there's no new evidence of nuclear weapons. The closest is the head of MI6 defending the "45 minutes" claim as "reliable" (though that still seems dubious to me in the face of the utter lack of WMD discovered) -- and even he describes the government's arms dossier as flawed and misleading.

Sounds like more Cheney lies to me, counting on americans not to be following overseas news too closely (often a safe bet, heh).