Jon Stewart On The Shrub's Blaming The Navy For "The Sign"

This clip from the October 29, 2003 show has the Shrub answering questions at his latest press conference (Oct 28-29, 2003 or so), where he talks rather vaguely about "terrorists" who are responsible for the latest round of suicide bombings in Iraq.

(This clip goes with this clip.)

What the Shrub says, and what his press secretary clarifies later, is that it's the Navy's fault for misrepresenting that the war was over with the "Mission Accomplished" sign. (Despite the fact that all the Navy did was put up the sign that the White House printed up and brought to the event.)

"The White House is basically saying they can't be held responsible for what the Navy does with a sign that they made and brought to the ship."

Here's the little clip about "the sign":
The Shrub Blaming the Navy for "The Sign" (Small - 4 MB)

Here's the complete clip of this bit: 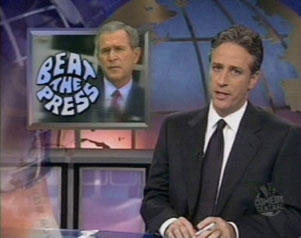 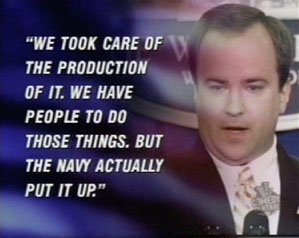 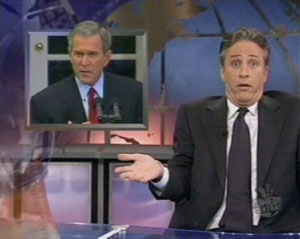