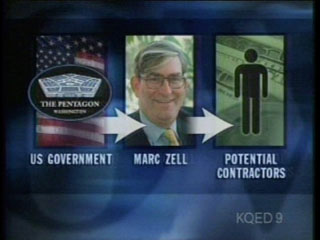 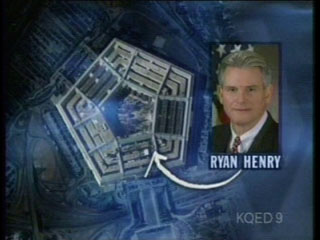 This story, "Cash and Carry," was Produced by Katie Pitra, features correspondent Roberta Baskin, and was Edited by Alison Amron.

This incredible segment documents the direct connections between the Shrub Administration and the main two or three companies that are profiting directly from the Iraqi reconstruction.

Join them as they connect the dots and talk to several of these people first hand. (Many would not return their phone calls, but others were very up front and matter-of-fact about it.)

I've taken screen grabs of many of the diagrams and things and transcribed information straight from the program for your convenience. 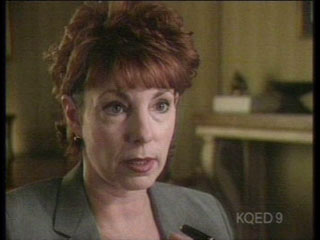 
"Welcome to NOW. The news from Iraq just keeps coming. A secret CIA report this week warns that 'more and more Iraqis believe the U.S. could actually lose the war.' American troops have started using Vietnam-like tactics, hitting back at suspected enclaves without proof that they're harboring insurgents. And American authorities are now limiting press access to both troops and independent contractors in Iraq...

As you know, there's a big debate over those billion dollar contracts being handed out to rebuild Iraq. Some Democratic Presidential candidates say the government is playing favorites. Defenders of the process, however, say "nonsense."...

..it's not easy to sort out the facts because the whole process in shrouded in buracracy and secrecy. One thing is certain, a lot of people in Washington and Baghdad look upon what's happening as a modern equivalent of a gold rush. They're not shy about promoting their political connections to get to the front of the line."


"Here beneath Iraq's landscape lies a vast ocean of oil. The second largest oil reserve in the world with over 100 billion barrels of crude ready to be tapped. When America invaded Iraq last March, troops raced first to secure the rich fields of Kier Cook (sp). So with vast reserves just waiting, why is the U.S. Government paying the Halliburton Corporation $2.65 per gallon to ship gasoline into Iraq from Kuwait, when one investigation discovered it could be done for less than a dollar a gallon.

The price difference alone is costing tax payers as much as a 100 million dollars. When we asked Halliburton about this discrepancy, they wouldn't tell us. And even a United States Congressman (Henry Waxman D-CA) can't find out why.

'If the evidence of what Halliburton has been charging for gasoline to be brought into Iraq is emblematic of anything, it's emblematic of no oversight, no transparency, and fleecing of the tax payers.' (Waxman)...

Just as the war started, Halliburton was awarded a no bid 7 billion dollar contract to repair Iraq's oil industry...Halliburton proved itself after the first Gulf war, putting out the fires in the oil fields. The Pentagon has said it didn't want to waste time finding someone new if Saddam burned the oil fields again, but Waxman says it's a prime example of what's wrong with the secrecy surrounding the government's contracts, because in the initial 87 billion dollar Iraq aid package there was another 2 billion dollars for Halliburton. And when Waxman started asking, he says neither the goverment nor the company seemed to know whay the 2 billion dollars was there or what it was for.

'We've got billions here, billions there. As one senator once said "A billion here, a billion there, it starts adding up into real money." ' (Waxman)... 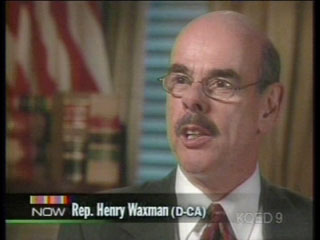 Who is Mark Zell?

Mark Zell is the principal of "Zell, Goldberg and Company," which assists American companies in connection with Iraqi reconstruction projects.


"And just who at the firm can connect you to the American Government? None other than Marc Zell. A former law partner of Douglas Feith. Who's Douglas Feith? Undersecretary of Defense. One of the handful of advisors who, long before September 11, championed the campaign to get rid of Saddam Hussein. Now Douglas Feith is the man in charge of the Pentagon's reconstruction of Iraq.

To sum up, Marc Zell is one well connected middleman standing right between the people to give the contracts and the people who want them. We asked to interview him about all this, but our calls were not returned." 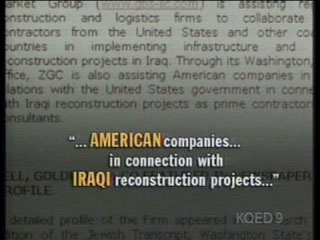 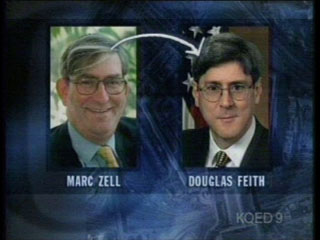 
"But even at the war's front lines, middlemen are busy making their deals. Marc Zell also works with a different firm called "The Iraqi International Law Group," which very much wants to be "your professional gateway to the new Iraq." Who's in charge of that gateway? A man named Salem Chalabi.

He has a famous uncle, Ahmed Chalabi. You see him there in Iraq, but before the war, this exile was hand picked by the planners in the Pentagon to shape the new government. When the war started, they air lifted Chalabi into the country with his own 700 man militia. At the center of all that planning, Undersecretary of Defense Douglas Feith. Whose old law partner, Marc Zell, now works with Ahmed Chalabi's nephew, providing that gateway to the new Iraq." 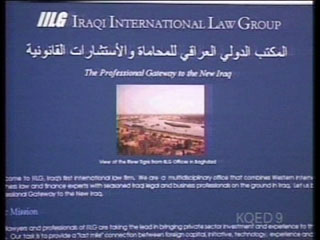 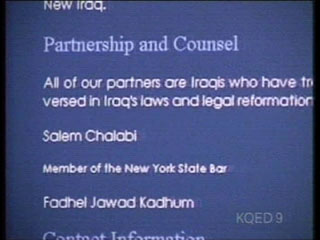 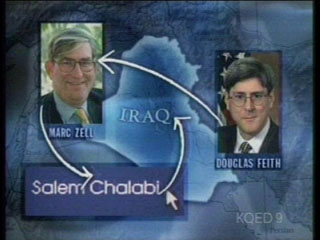 
"And Chalabi isn't the only member of the Iraqi leadership with close relatives lining up for those rebuilding contracts. The son of one Chalabi aid runs a phone company that is part of the group that won the contract to provide cell service to southern Iraq. Chalabi's aid told the Los Angeles Times that he doesn't understand what all the fuss over his son's inside connections. Comparing his son to the Americans, he said "It didn't stop Cheney from becoming the Vice President." 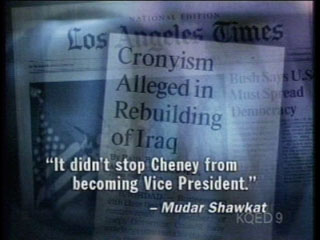 
"But these aren't the only friends of government promoting their inside influence in what's being called The Iraq Gold Rush. One firm was established just for that purpose: New Bridge Strategies...If you can't find your way around Baghdad, Mike Baker will lend you a hand. He's a former CIA officer and part of the management team [its CEO] for New Bridge Strategies Strategies and its sister company Diligence, a security firm. Both are staffed by old Washington hands and both are headquartered in the offices of Barber, Griffith and Rogers. The "Barber" in that title is Haley Barber, a former chairman of the Republican party and one of the highest paid lobbyists in Washington. He's now the Governer-elect of Missippi."

'Newbridge Strategies is staffed by people that have a great deal of experience in Washington. Everyone from Joe Albot to Ed Rogers. They understand how the administration thinks.' (Mark Baker)

"They should understand how the administration thinks. They used to be in it. Joe Albot ran George W. Bush's campaign for President, and was then put in charge of the Federal Emergency Management Agency (FEMA). Mike Baker's other collegue is this man, Ed Rogers. He served as a deputy assistant to the first President Bush. Here he is in Iraq with Mike Baker, posing in front of a tank outfitted in flak jackets and sporting a semi-automatic rifle." 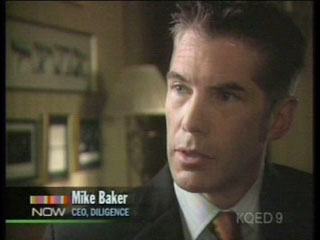 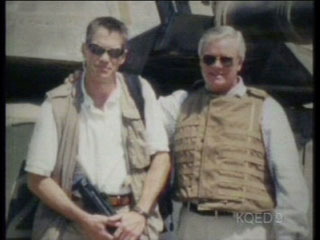 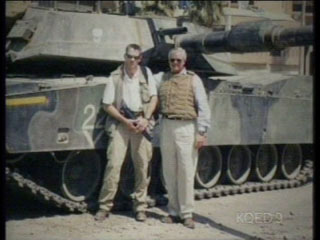 The Center For The Public Integrity has been trying to find out information about the nature of the work specified in some of these contracts, and is getting a lot of resistance.


"No one has tried harder to get at those details [of the deals] than the watchdog group the Center For The Public Integrity. In a six month investigation, the Center found that cozy insider relationships have become an accepted way of doing business in the fight against terrorism."...

But skeptics might be more easily persuaded if the government didn't shroud all this in so much secrecy. That secrecy makes it practically impossible to find out if those close to the administration are profiting off their inside information. And it makes it equally hard to find out if tax payers are getting their money's worth...

For example, in the name of secrecy, the Pentagon redacted almost every page of this contract. They have made it impossible to answer questions about fees being charged, or the work being done, or even the total cost of the job. Just look at the blacked out sections of this deal with the defense contractor SAIC...

All we know for certain about the contractor SAIC is that the top people of this privately held Fortune 500 company are wired into the Pentagon. On the board are a retired general and a former Assistant Secretary of Defense. And then there's Ryan Henry, he was SAIC's Senior Vice President. Until, that is, he went through that revolving door into the Pentagon. Into the very office that now supervises his former company's contract." 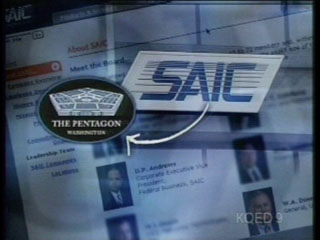 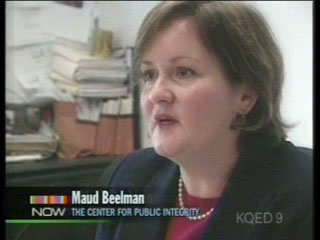 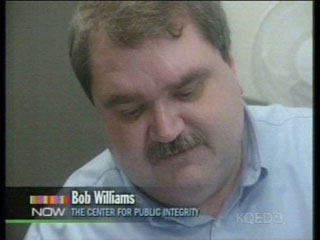 Below: The blacked out numbers of the SAIC contract. 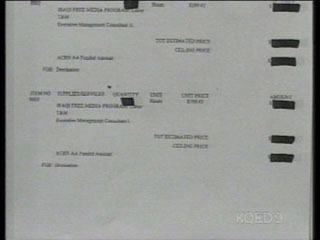 Below: Some Members Of Congress Are Trying To Get To The Bottom Of This 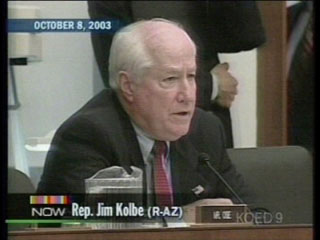 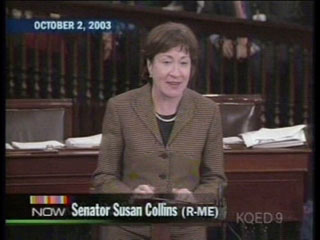 Below: Some Iraqi Native Businessmen Are Complaining They Can't Compete With American Companies 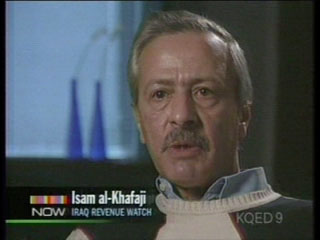