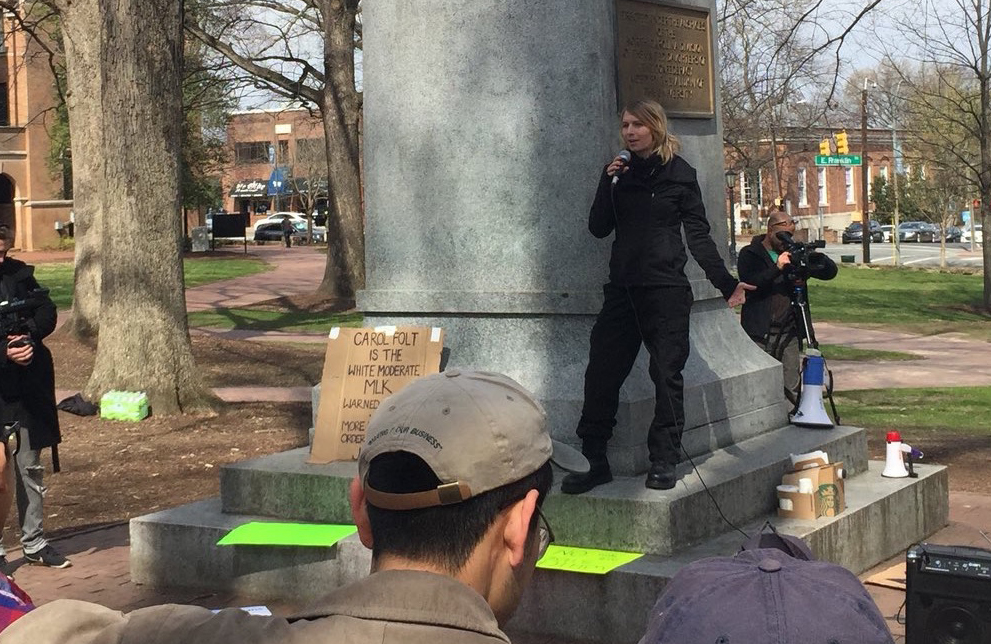 Chelsea Manning protesting at the Silent Sam Monument, on March 24, 2018.

Chelsea Manning attended the Silent Sam protest on March 24, 2018 at the University of North Carolina.

They made sure to put “Lost Cause” language into as many text books as they could, too. It’s one of the main reasons that southerners grow up with such an attitude about having pride in “the south” and their “southern traditions” etc. This is all code for looking back on a better time when people of color knew their place. (As in the  “lost tradition” of slavery.)

Why is this monument still standing? Because the University of North Carolina would rather pay thousands of dollars to guard its white supremacy statue than listen to its community about the correct way to proceed.

Today @xychelsea joined @workersunionunc @unc_ydsa @Move_Silent_Sam to call @UNC to #MoveSilentSam. How much longer will #UNC put students of color at risk? How many more resources will be squandered surveilling students for protesting #racist symbols? #SilentSam #SilenceSam pic.twitter.com/0ZWRZNhrKt

This Saturday at 11 AM, take a stand against anti-activist policies at UNC – the real risk for expression on college campuses. With @Move_Silent_Sam @workersunionunc @CampusY_UNC and @xychelsea pic.twitter.com/d22SBtROHW