I have been doing a fair bit of writing again, and just wrote this piece for Mondo 2000 about my friend and collaborator, Matteo Borri. 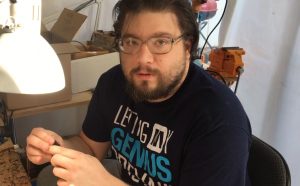 From the Mondo 2000 article:
LR: Tell me about this stuff you invented to help Puerto Rico. It is really interesting. The solar cell phone charger and the thing you call a “Vampire Charger,” that enables you to get whatever battery power is left out of any battery without the danger of blowing up your phone if the voltage doesn’t match.

MB: Yes. I named it the “Vampire Charger.” It is an inefficient but flexible device which will take any voltage that you might find in the world – from 1.5 volts to 12 volts – to even 110! (That’s when it stops, as 220 will blow it up, but 220 is not a common voltage in the U.S., so if you’re over here, it’s not a problem. I’ll have to come up with an European adapter 🙂

LR: So this is for when something bad has happened, obviously, and you need whatever power you can get, right?

It has two alligator clips.You connect them to ANY two contacts of the part in question, in any way. (To be clear: the color it doesn’t even matter, in this case.) And it gives you USB power, safely!

LR: I’ve never seen anything else like these Vampire Chargers – in terms of options to keep your phone alive after a disaster. I mean there are batteries that you can keep charged up; and this. Right?

LR: Why doesn’t the plus or minus or AC/DC matter? What is going on technically?