While looking forward to this Wednesday night’s NSA Comedy Night, I noticed a few more interesting developments that have hit the news last week on this subject.

Brian Knappenger, Director of the the upcoming documentary about Aaron Swartz, “The Internet’s Own Boy,” published a video op-ed video for the New York Times.  The five minute film addresses the popular question “Why Care About the N.S.A.?” in a short film exploring whether ordinary Americans should be concerned about online surveillance.

Also, it came out that our cell phone records were part of the N.S.A.’s larger plan.

All this makes it even more pertinent to have anonymous whistleblowing software, such as Secure Drop, which Forbes and the New Yorker are already using. The Freedom of the Press Foundation’s SecureDrop team, headed up by James Dolan and Garrett
Smith, both recently spoke at the Aaron Swartz Day celebration, and Aaron Swartz Hackathon kick-off, at the Internet Archive on November 8th. (Video of their talk here.)  Code from the hackathon has already been rolled into the latest download of SecureDrop.

SecureDrop was originally started by Wired’s Kevin Poulsen and the late Aaron Swartz. Poulsen is the plaintiff in the FOIA court case against the government over the release of Swartz’s Secret Service and FBI files, and has just released another 148 documents  as a result of his case. (Direct link to documents.)

So I hope to see you this Wednesday night at NSA Comedy Night, where we can all learn more about protecting our constitutional rights, and then proceed to let Will Durst shine a little laughter on the situation.

Jay headed over to Brewster’s to check out one of the $100 laptops. Pretty cool. 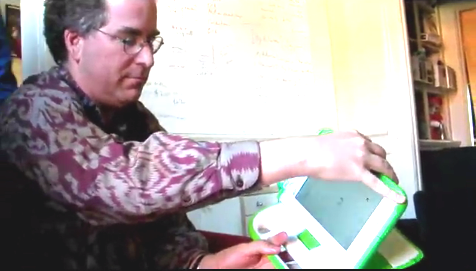 Here’s
an interview that was published last month in OpenP2P.com with Brewster Khale.

“Universal Access To All Human Knowledge” is a motto of Raj Reddy from Carnegie Mellon. I found that if you really actually come to understand that statement, then that statement is possible; technologically possible to take, say, all published materials — all books, music, video, software, web sites — that it’s actually possible to have universal access to all of that. Some for a fee, and some for free. I found that was a life-changing event for me. That is just an inspiring goal. It’s the dream of the Greeks, which they embodied, with the Egyptians, in the Library of Alexandria. The idea of having all knowledge accessible.
But, of course, in the Library of Alexandria’s case, you had to actually go to Alexandria. They didn’t have the Internet. Well, fortunately, we not only have the storage technology to be able to store all of these materials cost-effectively, but we can make it universally available. So that’s been just a fabulous goal that causes me to spring out of bed in the morning.
And it also — when other people sort of catch on to this idea that we could actually do this — that it helps straighten the path. You know, life, there’re lots of paths that sort of wander around. But I find that having a goal that’s that far out, but also doable, it helps me keep my direction, keep our organization’s direction. And I’m finding that a lot of other people like that direction, as well.

END_OF_DOCUMENT_TOKEN_TO_BE_REPLACED

Today was “talk like a pirate day.” The Internet Archive obliged, and dressed like pirates too.
From left to right: me, Molly, Astrid 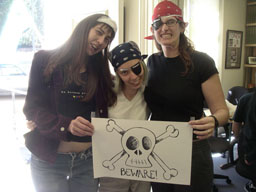 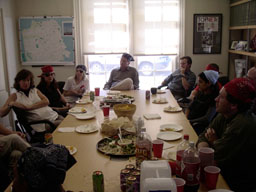 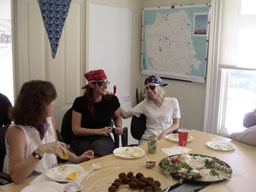 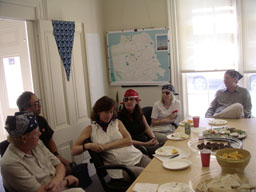 The Library of Alexandria (“BibAlex.”) (sorry, “eg” url doesn’t seem to work right now) in Egypt is working with the Internet Archive to build its own bookmobile.
Here is a little movie of Ashley Rindsberg, Internet Archive Bookmobilist, about his upcoming voyage to Egypt to build a “Library of Alexandria Bookmobile.”
Ashley will be blogging in this category from Egypt starting this Wednesday on (after he gets situated in Egypt) and going for the next two weeks while he sets things up over there.
Some independent film makers will be going over there with him to film the process for a movie they’re making. (More on this soon!)
Ashley the Bookmobilist (Small – 6 MB)
Ashley the Bookmobilist (Hi-res – 83 MB)
Audio – Ashley the Bookmobilist (MP3 – 3 MB) 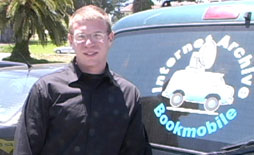 END_OF_DOCUMENT_TOKEN_TO_BE_REPLACED

Many apologies for taking so long to get the Alan Kay presentation up.
I wanted to present all of the elements of Alan Kay’s talk and presentation — as exhibits in my library, if you will.
I’ve been pondering the different possibilities for some time. How should I organize my library for those who prefer to browse through history, rather than have it flung at them in numerous lengths and file formats.
So, with this presentation, I bring to you the advent of my “tour” pages. Pages that I hope to place in every directory of my Internet Archive Library that will provide you with a little more information about what’s on the page, as well as the licensing info and any other relevant information for those works, as more information is made available to me.

Complete with new and exciting reasonable file sizes!
Below are links to a high resolution and low resolution QuickTime movies and audio MP3 file. Let me know if you need another format.
Brewster Kahle and son, Caslon, at the Creative Commons Launch

END_OF_DOCUMENT_TOKEN_TO_BE_REPLACED

Annalee Newitz has mentioned the Internet Archive Bookmobile project in a column about the Public Domain:
techsploitation – the public domain

The Internet Archive volunteers have put about 9,000 public domain books on its site, and now they’re driving around the United States in a high-tech bookmobile where people can link to the archive via satellite, download the book of their choice, print it out, and take it home to read. And yes, it’s all free. The Internet Archive bookmobile will make its first visit to an East Palo Alto school Sept. 30 and will stop at numerous other schools, libraries, and nursing homes during its cross-country trek…