So the Repubs have brought out the big guns to deal with its latest scandal of having spent the last three years constructing a massive phone surveillance program of every phone call made by everybody in the country:
Newt Gingrich was on Meet the Press yesterday morning.

According to Newt, yes they are spying on us, and it's for our own good, and we shouldn't let "libertarian concerns" about civil rights detract from the government's #1 job of hunting down terrorists.

So if you're one of those mamby pambies who's worried about your civil liberties, fine. But he says that 90% of American's want to catch terrorists...so, basically, whose side are you on anyway?

The trouble with Newt Gingrich is that he's so good at making insane reasoning sound reasonable.

Newt, like Colin, is a good soldier. He stepped in to help his team in its hour of need and I'm sure his efforts will prove most effective in calming the storm.

So I just want to ask everybody: Where's the outrage people?

They're spying on us - all the time - every day. And they've been doing it for three years -- and they're still doing it right now.

Doesn't this bother anybody? 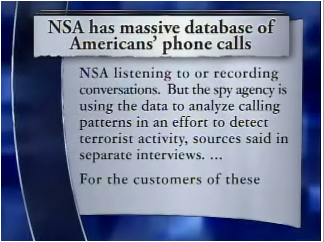 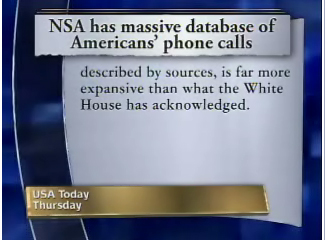