Me at the Second Life Salsa Party - They're line dancing! 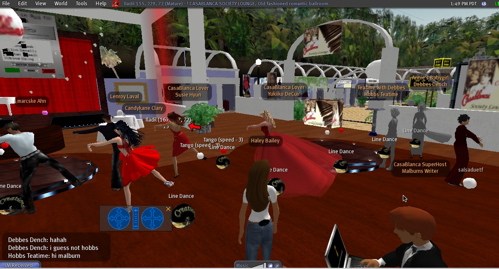 Ok it just happened! Something I'd only dreamed of just a few weeks ago:

I was literally twittered in first life about a party going on in real time in second life. So I clicked on the slurl that was provided in the twitter post, and was teleported to the Salsa party.

(Well yeah, and I had to close SL first to get it to work, because that just seems to be the norm with slurls these days. The "secondlife://" links that go direct seem to work more often than the slurls, but still not often enough. And I find myself having to close SL for whatever doesn't otherwise take to take in the Mapping/teleport process. - That's why this goes under quick tips too.)

This kind of SL/web integration is what I've been waiting for for so many reasons...where do i begin? :-)

I'll put up a little movie I made of it tonight.

But right now, on a more personal note, I must work on some actual paying Second Life consulting work. The transition is complete..w00t!

That's why the a-z index is slow coming together...but it's coming. Don't you worry. It's coming :-)

Posted by Lisa at 02:15 PM
Squawk - Twitter Meets Second Life and...Facebook's in there somewhere too

I've wanted this so bad I almost tried to do it myself a couple of weeks ago with a friend of mine -- but we decided to build some other sl stuff instead...

Note that I think the Facebook/SL integration is a result of the Facebook/Twitter integration. Which is just plain beautiful (though I haven't implemented it yet, several of my buds have, and all say it works great...)

But my point is that Facebook got Second Life integration "for nothing."
(Just from having open apis, i mean!) And look what it got them!

here's one post on it. I'll discuss in more detail shortly. Just wanted to start this "tidbits" category, so I can let you know about things in a more timely manner -- instead of waiting a day or two to attach a write-up to it.

I'll also go back through here every week or so and make sure I follow up on the tidbits and link to them properly from the a-z.

I have no idea if squawk thing works yet. Trying to get to it! Seems to be working for others though.

I'm really digging this twitter thing. You can friend me here.

Here's my twitter badge, guess I have to put in my blog template.... tsk tsk

I'm just learning about how twitter works and can't even figure out how to add friends yet.

Let me know about any particular software and services that you like!

I'll actually be tracking them over on the Mefeedia Blog soon...

Warning that I may be twittering fast and furiously and have no idea where my random thoughts might take me! Subscribe at own risk :-)