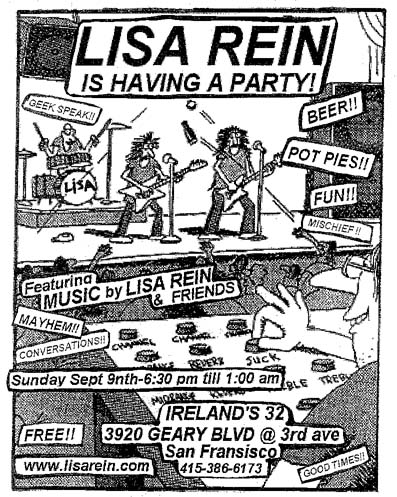 My friend critter made me this great new flyer for my party! (Thanks Critter!)

I'll be playing all my new songs, along with many of my songs from the last fifteen years or so, in little sets off and on all night long, starting around 6:45, and going till probably around midnight.

I've got a video projector and various footage I've been putting together that will be going in-between and during the live stuff. Update: will also be showing scenes from Monsturd and its upcoming sequel, InfectDEAD! (Zombies!)

I'm flying in my old guitar player from Idaho, Ron Taylor. He and I co-wrote many of the songs on the lisarein.com website.

I'm also flying my sister up from LA to sing harmonies with me on a couple songs.

It's pretty sweet of this pub to let me take over the place for the night. It's actually been a little dream of mine to have enough stage time to be able to go through all of my favorites from the last 15 years -- and in a fun filled environment where I can have as many people there as I want.

Ireland's 32 also has these *really* great home made beef or chicken pot pies, so if you need to come by early (it is a Sunday, after all), come by around 6:30 and make a dinner show of it. (Actually, you and a friend can probably split one easily, they're HUGE.)

They have a great pool table upstairs too! It's just an all around great party locale!

They're letting me use the bar for the night in the hopes I can bring in a crowd to buy drinks. So drink up. (It makes the music sound better anyway :-)

And if I'm lucky enough that you actually have old favorites that you want to make sure I perform, by all means, let me know! lisa@lisarein.com

In between some of my sets, my good friend
Tim Perkis will be performing a little set with his daughter around 7:30.

You may have seen Tim's cool new movie about improvisational music, Noisy People, around recently. Tim's also a fellow Dabble co-founder. (And a fellow ex-Dabbler/co-founder*.)

The Breezy Days Band will also be squeezing in a little set prolly around 9:30 or so.

Okay I'll be talking about this a lot over the next week, but I wanted to at least get all the basic information up.

Thanks! And I hope to see you there.