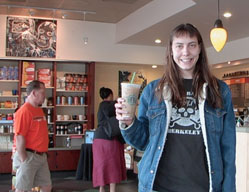 (These are two shots from the same Starbucks.)

Why am I starting to feel like a Starbucks spokesmodel?

(More background on this here.)

Posted by Lisa at 05:00 PM
Does It Really Prove Anything?

I went to sleep last night and woke up this morning thinking the same thoughts:

Never in a million years would I have ever predicted that I would be living in a world where I feel the need to take photographs inside of a Starbucks store in an attempt to somehow prove that I am still living in a free society.

Yes, the absurdity of it all does kick me in the teeth sometimes. Thanks for asking.

Lawrence Lessig was a bit upset yesterday at the prospect of Starbucks not allowing pictures to be taken inside of their stores.


Sounded like a plan to me. I went to my nearest Starbucks right away to take some pictures -- moving pictures that is -- to help out with the experiment.

I had no problems whatsoever from the Starbucks staff while having my picture taken. They were their usually cheery selves behind the counter while everyone else in the store watched as I danced around holding up my venti iced soy latte.

Another customer took the shots of me, so they're a little shaky (even shakier than normal :-)

Perhaps you can do the same at a Starbucks in your town :-)

"We still live in a free society! Yay!"

Here is the full text in case the link goes bad:

So I have this from an extremely reliable source, who vouches totally for the facts that follow.

Story one: Last month while visiting Charleston, three women went into a Starbucks. They were spending the weekend together and one of them had a disposable camera with her. To commemorate their time with one and other they decided to take round robin pictures while sitting around communing. The manager evidently careened out of control, screaming at them, Didnt they know it was illegal to take photographs in a Starbucks. She insisted that she had to have the disposable camera because this was an absolute violation of Starbucks copyright of their entire environment--that everything in the place is protected and cannot be used with Starbucks express permission.

Story two: At our local [North Carolina] Starbucks, a friends daughter, who often has her camera with her, was notified that she was not allowed to take pictures in any Starbucks. No explanation was given, but pressed I would think that the manager there would give a similar rationale.