The story I just blogged about the nano tech talks at the cryonics conference reminded me that Timothy Leary wrote about Alcor in the book I worked on with him (Surfing the Conscious Nets). (Contrary to popular belief, however, Tim did not freeze his remains.)


I went and dug up the reference to Alcor, just for fun. For those of you with a copy of Surfing the Conscious Nets around, it's on page 16. For the rest of you, I've created a scan here: 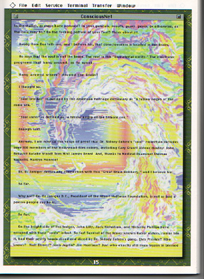 I'm sure this is OK with both Last Gasp publisher Ron Turner, who is a friend of mine, and would consider it promotion for the book, and Tim Leary himself, because he told me in 1995 that it was his dream to have all of his works freely available online. A dying wish, if you will.
(Yeah, we're talking everything. So I'm sure he wouldn't mind a few scans.) 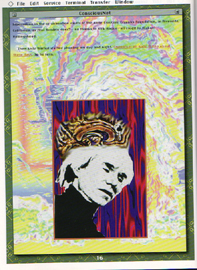 On the bright side of the ledger, John Lilly, Jack Nicholson and Michelle Phillips have escaped with their "souls" intact. So far! Several of the lesser known Gabor sisters, rumor has it, had their pretty heads sliced and diced by Dr. Sidney Cohen's gang. Elvis Presley? Who knows? Walt Disney? Janis Joplin? Jim Morrison? Just who exactly still lives frozen in blessed hibernation in the re-animation vaults of the Alcor-CryoCare Cryonics Foundation, in Riverside, California, as Jimi Hendrix does? -- no thanks to Nick Rogue--all credit to Michael Hollingshead.

Then Andy Warhol started phoning me day and night. Cryonics is all Andy thinks about these days. So he says.

New Happy Tree Friends DVD
Posted by Lisa at 07:52 PM
"Rezrobics" Exercise Video Free to American Indians
Here's a great video created by Gary Rhine about exercise and eating right. The video is freely-available to American Indians and a $40 donation for the rest of us. My guess is that most everyone can use the information this video contains. I'll let you know more when my set arrives.

Diabetes is a serious problem in Indian communities as a result of the nutrition-poor commodity-based diet that they were forced to survive on since around the turn of the last century, when Indian people were forced onto reservations and forbidden to hunt or fish.

The government promised to provide whatever food would be needed and did so with commodities; primarily white flour, white sugar and lard. A high sugar, high carbohydrate, high fat diet for the last 100 years has caused type two diabetes to become quite commonplace among Native American populations.

The videos are available free of charge to those of American Indian descent. A $40 donation is requested for non-indians. Order Now!

There is also a special commons-friendly message on the tape asking viewers to please make copies and distribute them freely:


Copies of the videos are being distributed free of charge throughout the Indian communities of North America. While Navajo Health Promotions distributes on and around The Navajo Nation via clinics, schools and video stores, DreamCatchers oversees distribution to the rest of "Indian Country". There is no FBI warning on the programs. Instead, the opening message states, "Please make copies and give them to your friends and relatives".