MoveOn.org has sent out a great round up of resources and articles about the situation in Liberia.

GRASSROOTS INTERVIEW WITH LUIS MORENO-OCAMPO
There has been a delay in getting the responses of the International Criminal Court's Chief Prosecutor, Mr. Luis Moreno-Ocampo, to the interview questions you posed. We'll send his complete responses as soon as we receive them.

EDITORS' NOTE
With so much crucial work to be done for 2004, we've decided to shift the content and frequency of the MoveOn Bulletin. Instead of covering every major domestic and international issue, we'll focus in on issues relevant to our campaigns. We'll use the Bulletin to set the context of those campaigns. That means you'll receive the Bulletin less often, but it will be more focused and relevant for your informed participation. Thanks for your continued help with these important issues.

CONTENTS
1. Introduction
2. One Link
3. History of Liberia
4. Human Rights
5. Taylor Steps Down
6. Intervention and Peacekeeping
7. Hot Off the Press
8. Credits
9. About the Bulletin

INTRODUCTION
This bulletin's focus is the historical context necessary to understand the dangerous situation in Liberia. Unrestrained fighting between government and rebel forces created a grave humanitarian crisis. In the capital of Monrovia, people are unable to access food, civilians are recruited to fight against their will, and the collateral damage (war-speak for murdered civilians) is in the hundreds of thousands.

The conflict in Liberia does not lend itself to simple moral judgment. Surely we would hope for an end to the military conflict and a start to peaceful self-determination, but neither the government nor the rebels are certain to bring this about. While both speak of democracy, their atrocious abuse of human rights tells observers their ambition is power and political control.

While the fighting has subsided, peace remains far away.

ONE LINK
This Q&A on peacekeeping intervention from the BBC explains why there's fighting in Liberia and describes the regional context of the crisis.
http://news.bbc.co.uk/1/hi/world/africa/2975834.stm

The Village Voice describes the relationship between the U.S. and Liberia, which was founded by freed African-American slaves. This article also asks whether President George W. Bush's involvement may be intended to court African-American voters in 2004.
http://www.villagevoice.com/issues/0328/mondo1.php

HUMAN RIGHTS
A Human Rights Watch publication on abuses by the Liberian government and the rebel group Liberians United for Reconciliation and Democracy (LURD). Testimonies describe summary killings, torture and abuse of civilians, rape, and abduction into forced labor and fighting. This report recommends continuing the UN Security Council's arms embargo on both government and rebel forces.
http://www.hrw.org/reports/2002/liberia/liberia0402.htm

MSNBC on the use of child soldiers in the conflict between the government and the rebels. The article estimates that 50 to 60% of the soldiers "are under 18.
http://www.msnbc.com/news/945577.asp?0sl=-11

TAYLOR STEPS DOWN
Last Monday, President Charles Taylor resigned as president under pressure from rebels, the United States, and neighboring countries. He fled to Nigeria, where he was promised protection. Taylor's vice president, Moses Blah, will act as interim president until October.
http://www.moveon.org/r?462

This past June, Taylor was indicted as a war criminal by the Special Court for Sierra Leone, a precursor to the International Criminal Court. Here, Human Rights Watch argues Nigeria must turn him over for trial in cooperation with international law.
http://www.hrw.org/press/2003/08/liberia081103.htm

INTERVENTION AND PEACEKEEPING
The international peacekeeping force intervening in Liberia is composed primarily of troops from the Economic Community of West African States (ECOWAS). PBS's Online NewsHour describes the creation, accomplishments, and mission of ECOWAS.
http://www.pbs.org/newshour/bb/africa/liberia/ecowas-background.html

Mother Jones has an excellent summary of arguments for and against U.S. intervention. These arguments were made before President Taylor resigned, but they confront interesting questions about whether it's desirable for the U.S. to play the role of world policeman.
http://www.motherjones.com/news/dailymojo/2003/30/we_487_02.html#one

Related to its objections to the International Criminal Court, the United States insisted on immunity for peacekeepers entering Liberia.
http://www.hrw.org/press/2003/08/liberia080103.htm

On Thursday, 200 U.S. Marines joined ECOWAS peacekeepers to secure Monrovia. Rebel forces withdrew from the capital, allowing the delivery of food and other humanitarian aid to begin.
http://news.bbc.co.uk/1/hi/world/africa/3149255.stm

The Los Angeles Times yesterday reported that in July the Pentagon quashed a report by its own specialists calling for urgent action in Liberia. Defense officials have said the move was "definitely strange" and "inconsistent with our operational procedures." Last week's intervention comes five weeks after the report.
http://www.latimes.com/la-fg-intervene17aug17,1,3823806.story

HOT OFF THE PRESS
Today, a peace deal was signed between the government and the two rebel groups. The deal, negotiated by ECOWAS, will set up a transitional government in October with elections to follow in two years. Transitional leaders will be announced as soon as Tuesday.
http://news.bbc.co.uk/2/hi/africa/3158647.stm

ABOUT THE MOVEON BULLETIN AND MOVEON.ORG
The MoveOn Bulletin is a free weekly collection of links, which represent a broad range of views on important political issues. These links aren't meant to represent the position of MoveOn.org. The full text of the MoveOn Bulletin is online at http://www.moveon.org/moveonbulletin/; you can subscribe to it at that address.

MoveOn.org is an issue-oriented, nonpartisan, nonprofit organization that gives people a voice in shaping the laws that affect their lives. MoveOn.org engages people in the civic process, using the Internet to democratically determine a non-partisan agenda, raising public awareness of pressing issues, and coordinating grassroots advocacy campaigns to encourage sound public policies. You can help decide the direction of MoveOn.org by participating in the discussion forum at:
http://www.actionforum.com/forum/index.html?forum_id=223

Posted by Lisa at 10:49 PM
Daily Show On Developments In Liberia 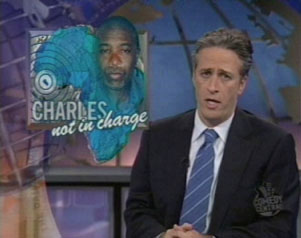 Posted by Lisa at 09:33 PM
Daily Show Clip: The Shrub Heads To Africa

I don't know what to make of any of this yet. At first glance, it looks like we're looking for an excuse to set up a base in Africa -- but like I said -- I don't know nuthin' about African politics or the history behind the current conflicts over there.

I just know I want to track the situation, and that I don't want to mix this stuff in with the domestic policy issues going on at my Shrub Watch category.

Daily Show On The Shrub In Africa (Small - 9 MB) 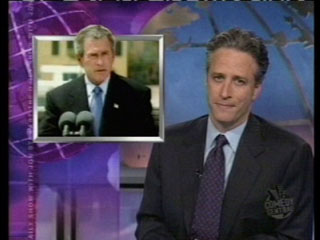