Just wanted to give you all the heads up that tonight's NOW Broadcast on PBS features bloggers:

From an email sent to me:


Left-leaning political bloggers are determined to demonstrate their real world influence in the upcoming mid-term elections. But will they finally make political headway, or just more hype? On Friday September 15, at 8:30 pm (check local listings), NOW visits a major political blogging convention and examines the candidacy of surprising U.S. Senate primary winner John Tester of Montana to find out. The bloggers' effect on Tester's success is hard to accurately measure, but bloggers do take much credit for it and indeed made a strong push for his against-the-odds win.

NOW meets the real people behind some of the Internet's most opinionated and widely-read liberal blogs to find out if they can really move the political needle. Next time on NOW.

This week, the NOW website at www.pbs.org/now features insightful web-exclusive commentary from blogging heavyweights Andrew Sullivan and Arianna Huffington. Also, in another web-exclusive, NOW's Maria Hinojosa interviews journalist Maziar Bahari from his home in Tehran about what drives and hinders efforts to halt Iran's nuclear ambitions. NOW also invites users to go "beyond the byte" with Election Insight 2006, a comprehensive political investigation tool.

Posted by Lisa at 01:19 PM
NOW On The Current Threat To The Public of Losing Net Neutrality

This is from the June 2, 2006 program of NOW with David Brancaccio.

This story explains the technical details in a manner that anyone can understand and gives all sides of the argument -- including those of the telecom companies.

This contains an interview with blip.tv's Mike Hudack about how start-ups would never be able to get a fair shake if this neutrality were taken away.

There's also a big threat to free speech in that, should net neutrality go away, the telecommunications companies will be able to control what content goes where, and what content doesn't go anywhere.

Update: So I just pulled this track from the cc mixter website because I used samples from PBS NOW that I did not create myself. And although I believe that it is my fair use to use them, and for others to use them, it is an indisputably gray area, and therefore does not belong on CC Mixter, where everyone knows that reuse is free and clear. Fair enough :-)

This adds a "vocal" track from Colin Powell, Lawrence Wilkerson and David Brancaccio (PBS-NOW) over the top of Ashwan's Borrow and Take2

The sound clips are from this episode of NOW on PBS: http://www.pbs.org/now/thisweek/index_020306.html

samples i used:
I believe it was my fair use to use the sound samples from the PBS Now program detailing Larry Wilkerson's recount of the day's events during Powell's speech to the United Nations Security Council.

I used my tivo to capture NOW and then my camera to capture the video from my tivo via the analog hole. Then I used itunes to generate an mp3 from the .mov file, and imported that into protools, along with ASHWAN's track, to create the first part of this track, which is my remix. (The rest of the track after Colin Powell stops talking is the same as the ASHWAN version.)

The sound clips are from this episode of NOW on PBS.

This uses the clips from NOW with David Brancaccio that interviews Larry Wilkerson, Colin Powell's ex Chief of Staff, about how he and Colin played into the hands of the Shrub Administration when they unwittingly "participated in a hoax on the American People, the International Community, and the United Nations Security Council."

Posted by Lisa at 02:22 PM
Watergate On Steriods - The Truth About Bush's Domestic Spying Program

The Watchers: Maria Hinojosa on NOW - The Truth About Bush's Domestic Spying Program

Link to NOW website on this story, which includes documents a plenty backing up all the facts mentioned below (and much more).

So really things are getting pretty interesting.

On the one hand we have the Vice President's right hand man Scooter Libby indicted by the Justice Department for leaking CIA Agent Valerie Plame's identity.

We have Republican House Leader Tom DeLay having to step down in the face of his indictments in Texas.

We have "Bush Pioneer" Jack Abramoff pleading guilty to various money laundering and fraud charges, and in the process revealing the names of 60 or more other corrupt Republicans that were in on the racket.

But now, it would appear we have something like "Watergate On Steroids."

This isn't some office break-in that the President "knew" about via smoke filled rooms. This is an executive order straight from Bush himself self-authorizing a no-warrants-necessary domestic spying program.

Perhaps you saw Condi Rice on Meet The Press a few weeks ago making absolutely no sense whatsoever. She cites FISA (the Foreign Intelligence Surveillance Act) as the reason for the President's authority to issue no-warrant spying. In reality, of course, FISA is actually the reason we can conclude so easily that the President so clearly broke the law; If he had obtained FISA warrants for his Domestic Spying program, it would have been legal.

Programs such as Bush's are exactly the reason that FISA was created: to protect Americans from the kinds of governement abuses carried out by the Kennedy, Johnson and Nixon Administrations during the 60's and early 70's. It was passed in 1978 after it came out that the government was spying heavily on whoever they wanted -- on everyone from Jane Fonda to Martin Luther King.

The point was that "No," actually, being at War isn't an excuse to throw the Constitution out the window, in case you were wondering. That part the Founding Fathers wrote about "The right of the people to be secure against unreasonable searches and seizures..." -- They meant that. And they meant it *especially* during times of war. Because then, like now, there was always some war going on with someone, somewhere. These rights have to be protected...but...hey, here's this other court -- one set up explicitly for granting these kinds of spying warrants, and quickly. So really, the government can still spy on you if it wants, but not as much as it wants to, willy nilly, and not without having to answer to anyone, ever. (So if you're doing something that *looks* reasonably suspicious, look out!)

And spy they did. Only 5 of the more than 19,000 spy warrants presented to FISA were ever refused. But Bush wanted to spy on even more people. And on people that maybe didn't have any connections to foreigners on the outside - what FISA was initially set up for.

Bush's supporters are also saying that Congress explicitly gave Bush permission to commit these acts under the Joint Resolution passed almost unanimously by Congress in the days immediately following 911, referring to the passage that authorizes the President "To use all necessary and appropriate force against those...planned, authorized, committed, or aided the terrorist attacks..." But we already know that the types of people being spied on in what came to be known as "The Program" went far beyond those directly connected to Al Quaeda or 911.

Here's NOW's take on this story. They let both sides tell there story.

But I think you will agree, after seeing the details for yourself, that it's pretty matter of fact.

I've split it up into 4 pieces. I'm learning to list them all individually now so video RSS readers, such as FireAnt will download the media. 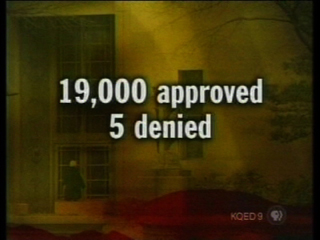 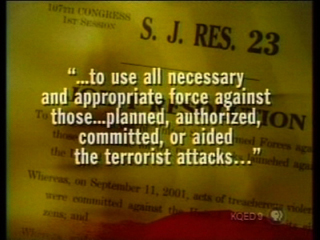