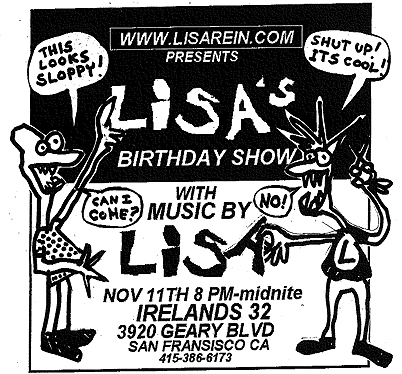 Printable pdf
Thanks again to Critter for the great flyer!

Links below to individual songs - i'm going to put the lyrics to FaceTwit in the More... (My Facebook Twitter Song)

I just been busy peeps! It will be great to see whoever can make it!

Actually, a lot of people have told me they're coming -- so it should be fun!

I know Sunday nights are hard, and I have a friday show nov 30 coming up too at the same place. Then, that will be it for this venue, because it turns out the mobility/accessibility sucks there and I want to find a facility with better access for my events. 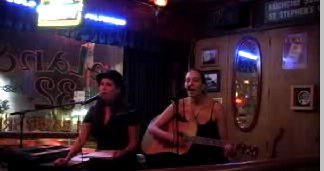 Running By (by lisa rein) (sung by sierra and lisa rein)

Everything except "Dirty Back Road" is made available under a Creative Commons Attribution License (v3.0 baby!)

Lyrics For FaceTwit
Words and music by Lisa Rein
Sang Sept 9, 2007 by Sierra and Lisa Rein

I'll be playing all my new songs, along with many of my songs from the last fifteen years or so, in little sets off and on all night long, starting around 6:45, and going till probably around midnight.

I've got a video projector and various footage I've been putting together that will be going in-between and during the live stuff. Update: will also be showing scenes from Monsturd and its upcoming sequel, InfectDEAD! (Zombies!)

I'm flying in my old guitar player from Idaho, Ron Taylor. He and I co-wrote many of the songs on the lisarein.com website.

I'm also flying my sister up from LA to sing harmonies with me on a couple songs.

It's pretty sweet of this pub to let me take over the place for the night. It's actually been a little dream of mine to have enough stage time to be able to go through all of my favorites from the last 15 years -- and in a fun filled environment where I can have as many people there as I want.

Ireland's 32 also has these *really* great home made beef or chicken pot pies, so if you need to come by early (it is a Sunday, after all), come by around 6:30 and make a dinner show of it. (Actually, you and a friend can probably split one easily, they're HUGE.)

They have a great pool table upstairs too! It's just an all around great party locale!

They're letting me use the bar for the night in the hopes I can bring in a crowd to buy drinks. So drink up. (It makes the music sound better anyway :-)

And if I'm lucky enough that you actually have old favorites that you want to make sure I perform, by all means, let me know! lisa@lisarein.com

In between some of my sets, my good friend
Tim Perkis will be performing a little set with his daughter around 7:30.

You may have seen Tim's cool new movie about improvisational music, Noisy People, around recently. Tim's also a fellow Dabble co-founder. (And a fellow ex-Dabbler/co-founder*.)

The Breezy Days Band will also be squeezing in a little set prolly around 9:30 or so.

Okay I'll be talking about this a lot over the next week, but I wanted to at least get all the basic information up.

Thanks! And I hope to see you there.

Posted by Lisa at 05:46 PM
Had A Great First Show - My Sister's Awesome

Looking forward to the
show on June 10!

And the new song went over very well! It was as gratifying as I had hoped :-)

Sierra and I really kicked ass on the few songs we sang together. I looking forward to working out a whole set of songs with her.

I'm going through the video to pick out a nice clip or two to show you.

Special thanks to gregory for helping me set up my sound!

Posted by Lisa at 07:31 PM
Reminder that I'm Playing the Farmer's Market In Kensington Tomorrow

Tomorrow I'm performing with my sister at the Farmers Market in Kensington from 10-2.

from Bart, take the 7 bus from berkeley bart. tell the driver you're going to "Kensington Stores"

Just drive up to where the stores are on the Arlington

take 580 north Berkeley, Buchanan street exit. Go right.
Buchanan turns into "Marin" keep going until you get to a roundabout from hell and try to pick the left turn with the least hills (Arlington). Then stay on that road till you get to stores where there once was only houses.

I wrote a couple songs this last week just for the occasion for us to sing together.

My sister's what I call "me +" when it comes to singing -- we both lucked out in that we've never had to try hard to sing well. Our voices have just always been there for us.

But she's actually been working hard at having incredible pipes for years. She has this crazy amazing range that she uses when she does comedic opera and such in LA. (That clip is from Mulholland Christmas Carol.)

Anyhoo, I'm really excited that I finally started putting her to good use in my music.

So maybe I'll see ya Sunday. If not, no biggie. I've got a show on June 10 in SF and I'm going to be playing all over the place, so I'll cyou whenever it's more convenient...

It just feels so good to be playing for people now instead of my cat. (He just threw me a look! How do they KNOW?)

And now, when I write a new song, like i just did over the last few days, I get to play it for people.

Posted by Lisa at 11:55 AM
Come See Me and My Sister Perform at the Kensington Farmer's Market on Mother's Day - May 20th!

Update! This show has been moved to May 20th!

Hey I just landed another gig next weekend from 10am-2pm on SUNDAY, May 13th at the Kensington Farmer's Market.

Since I've just got oodles of time, I'll probably be going through my whole set. (25+songs)

I'm bringing my sister up from LA to keep things jamming in-between my sets.

We might even perform a few songs together. We definitely will since we get an extra week to prepare!

Anyway come by and say hi, if you're in the neighborhood.

If you can find your way up to the stores along the Arlington, you've found it.

If you take Bart, take the 7 bus from either Berkeley or North Berkeley Bart.

Update 9pm - due to airport hell coming down in Oakland this evening (more on this later), I'll be at tomorrow night's show, instead.
I've decided to hop down to LA tonight to see my sister,
Sierra Rein, perform in L.A. It's a classy singer/piano gig that comes with dinner.

My sis is pretty talented! I'm sure you'll have a good time. It's her first time performing this new act she's been working on for a while, so it would really great to have you there!

Here's the letter from Sierra explaining the show:
Hello Y'all!

Have a hot date this Friday or Saturday? Love music, great singing,
and fun piano playing? Want to see me in a sleek, skin-tight black
satin dress?

Spend a special night this weekend with me and my friend Matt DeMars
as we debut our Cabaret nightclub act, DEMARS AND REIN.

It would mean a lot to me to see you in the audience. A lot, as this
is our first Cabaret show. I know, I know, I know $50 may be steep
right now, but I won't be lying when I tell you a great night of music
(perfect for a birthday gift, a date, or a special night out with your
loved one) is in store for you. We will knock your socks off, and if
you're not wearing socks I'll knock something else of yours off,
guaranteed. Live theater, cabaret music, and a meal all in one is not
a traditional or easy-to-find venue in Los Angeles. Come and support
new acts, great food, and the pleasure of live performance.

And may I remind you about the sleek, skin-tight dress?

See you there for two very special nights!
-Sierra

On September 15th and 16th, Sterlings Upstairs presents the exhilarating Cabaret debut of LAs own DeMARS and REIN. Classically trained on the piano since the age of 7, Matt DeMars repertoire includes nearly 500 songs ranging from 1920s Jazz to the Great American Song Book. Influenced by Billy Joel, Nat King Cole, and Andrew Lloyd Webber, his composing talents resulted in Pieces of My Heart which debuted in 2003. Sierra Reins love of singing began at age two, when her familys kitchen table became her first stage. She was inspired and instructed how to belt out tunes by watching video tapes of MGM musicals starring Judy Garland, Kathryn Grayson, Anne Miller, and Dolores Gray. Ms. Reins romance with Broadway musical theater in Los Angeles includes starring roles in The Sound of Music, Camelot, The Little Shop of Horrors and appearing as Edith Piaf in The Night of the Black Cat, to name but a few. www.sierrarein.com.

Posted by Lisa at 02:34 PM
Recent Entries in My Sister
Birthday Party Sunday Nov 11 - Video From My September 9 Show
Come to My Party September 9, 2007 - Ireland's 32 in San Francisco
Had A Great First Show - My Sister's Awesome
Reminder that I'm Playing the Farmer's Market In Kensington Tomorrow
Come See Me and My Sister Perform at the Kensington Farmer's Market on Mother's Day - May 20th!
If You're Around in LA This Weekend - Sept 15-16 - Come To My Sister's Performance In Studio City