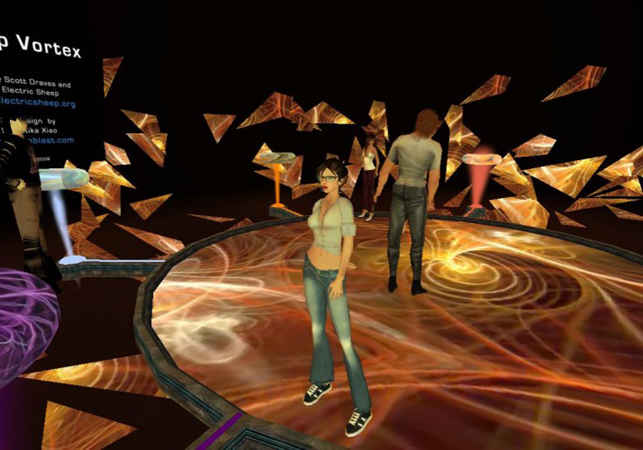 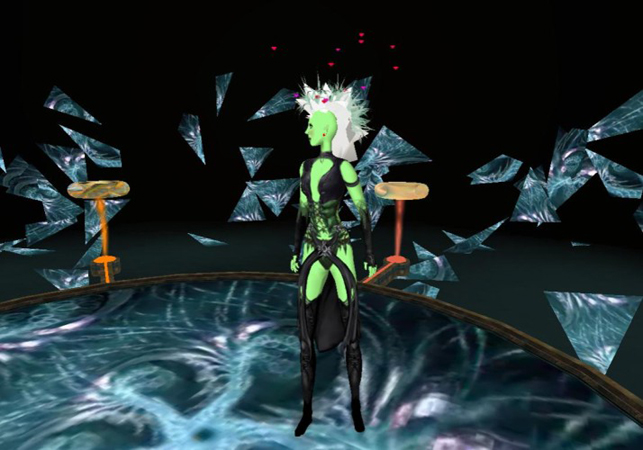 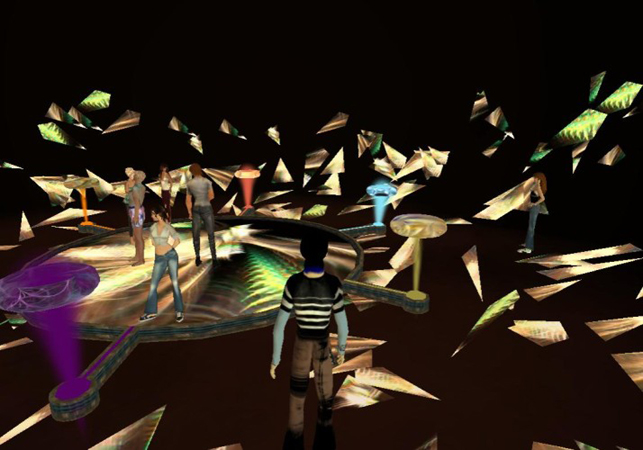 Posted by Lisa at 01:54 AM
Interview with Electric Sheep Artist Spot Draves - Part 1

Keep an eye on my Node Zero Gallery Category for more interviews with artists all month long.

The interview below is the first of several parts. It took place on January 30, 2008.

Spot: I've been programming computers my whole life, and this is the distillation of all of that experience. So yeah, they're not supposed to look like sheep. They're not supposed to look like anything at all. In fact, I don't even really control what they look like specifically, because they are created by this Internet distributed cyborg mind, and they're created by everybody who's watching them.

The reason they are called the "electric sheep" is because it's the computer's dream, and not just your computer, but like THE computer, like the gaian All computers, on the internet, connected, and all the people behind them, as one entity.

What I did was, I wrote the software, and developed the algorithm. And it's based on a visual language, which is a space of possible forms. And then, all the computers that are running the software communicate over the internet to form a virtual supercomputer that then realizes the animations. It takes an hour per frame to render.

Now, the one in Menlo park is double the resolution and six times the bandwidth.

Lisa: This is something in RL that people can go in the physical world and see?

Spot: Yes. It's on a flat panel with a frame around it that hangs on the wall. A 65" plasma screen.

Lisa: Where does that live?

I designed the frame and had it built, and had it installed, and that one has some special electronics so that it shuts down when nobody is watching, to save power.

Lisa: So this running off a computer? (We are watching as he projects on to my livingroom wall.) So it's basically a screen that's hung on a wall that's then attached to a computer that's running the art?

Spot: That's right. And that one has a terabyte database. This one is 100 gigabytes.

Lisa: So it's always generating new art? Or is it sort of recycling through?

Spot: No. What it does is this. See, because it takes an hour to render each frame, and there are 30 frames per second and so this is far from real time. I mean, what is that, a factor of 100,000? So you can't generate it in real time, and that's part of the inspiration for the virtual worldwide supercomputer.

Lisa: A snapshot, if you will?

Spot: Yes, and then I edit it. Let me tell you more about the process, which is multifarious and complicated. The bottom line is that it all gets stored in a video graph, which is on the computer, and played back. It's in 1000 pieces that play back in a non-repeating sequence. So it's infinitely morphing, and non-repeating, but you do have refrains. So images, sheep, do come back, but then after you see a sheep, it will go and do something else.

So like, watching the video, there's an algorithm that is running live, as you watch it. But the algorithm is like walking in a garden. Ya know, like an english garden with paths? As you walk along the path you see pretty flowers, and then you come to an intersection, and you have your choice of which path to take next. And so, more or less, if you wander at random, you will come back and walk the same path twice, and see the same thing twice, but, then you'll go and you'll do something different. So, that's cool because there are some parts of the garden which are really remote, and the only way to get to them is by a certain sequence of turns, and so there are some sheep which only appear extremely infrequently, like, ya know, the rare, special ones and so, in order to see the whole thing, you'd have to watch continuously for months.

So, this one, in this 100 GB one, there are 1000 clips. If you played those clips/sheep (I'm sort of switching back and forth on what they are called), if you played them all end to end, it would be like 18 hours. So as far as a human's concerned, it's infinite.

Spot: Oh yeah - It really affected me. That's Hans Morovec's Homeland. I was really immersed in those ideas when I was a student.

Lisa: You were a student in Artificial Intelligence there?

And so, I didn't create a language. I created a language for creating languages, because I wanted to make it easier for everybody to create their own language. And so you'll get these towers of languages, and it's almost, basically like virtual reality, where you have realities within realities, where you can have languages within languages.

Lisa: And they all fit into the same architecture?

Spot: Yeah. So you can analyze these things coherently, and you can create programs which process and optimize these structures.

The genetic code is now in XML. The language, was the key innovation.

Lisa: Wow. What did you use before the XML? What else were you doing that with?

Spot: Before XML, for this genetic code, I just had some stupid text format which I made up myself.

Lisa: Ah. I see. But it was hard to do the kind of architecture you described, without having XML right?

Spot: Oh well that stuff I did more with LISP. Scheme in particular. Scheme is just a version of LISP.

Spot: So the visual language is the genetic code. It's the mapping from the genotype to the phenotype. And so each of the sheeps has virtual DNA that controls how it looks and how it moves. And everything you see is an expression in that language. And then, it's a continuous language. It has a lot of special properties, because it was designed to be able to do this. It's made with floating point numbers, and part of the idea behind this whole thing is that life and its existence is continuous.