Thanks a lot to everyone for helping out with this. I know a lot of you did, because I heard the anceinttrees.org website got a lot of extra hits, and was told that the issue received a lot more attention over the last few weeks than it seemed to be getting earlier.

Here's what I just found out:


Dear Friend of the Forest,

Unfortunately, the Heritage Tree Preservation Act failed to pass the California Assembly this year. In the end, we fell short by a handful of votes. We know that you share our deep disappointment. But its time to step back and appreciate just how much weve accomplished.

The struggle to protect Californias heritage trees will continue.

From the very beginning, this campaign has defied expectations. Cynics said the bill would never go anywhere.

They said it would never pass a single committee. It passed five grueling committee battles, both in the Senate and the Assembly.

They said it would never pass the Senate. It did.

They said it would never get widespread support. SB 754 had the support of leaders like Barbara Boxer, Nancy Pelosi and John Burton, as well as thousands of Californians from all walks of life who rallied behind the imperative to protect our remaining heritage trees.

With your continuing help, we will move forward. We are determined to see meaningful legislation passed, and we will continue to work toward this goal until we have protection for our remaining unprotected old-growth trees.

Well keep you posted as our efforts move forward. Be sure to check back to our website (www.ancienttrees.org) periodically for new information.

On behalf of the trees, thank you.

Posted by Lisa at 08:58 PM
SB 754 Lives! - Time To Make One Or Two More Phone Calls To Push This Thing Through

Alright guys, we have actually had some success in keeping this SB 754 alive.

I spoke to Autumn Bernstein at the Campaign for Old Growth, the organization sponsoring the Bill, and it looks like this thing is going to be voted on any day now. She says that the most important thing you can do to help this thing pass is to call these two people below and tell them you support a "yes" vote on SB 754 to save our redwoods:

I just called both of them and left messages with their staff. Both of them had friendly staff who were familiar with the SB 754 controversy and basically wanted to know if I was for it or against it. (They're keeping a tally of phone calls.)

Now's your chance to take less than a minute of time (not kidding, I did both calls in about a minute) for what could make a big difference on this bill getting through.

Despite the passage of Fridays deadline, SB 754 is still very much alive and, hopefully, on its way to a full vote of the Assembly in the next day or two.

On Thursday, August 12, SB 754 passed the Assembly Appropriations Committee. But instead of being sent to a vote of the full Assembly, it was sent into a political logjam.

That logjam appears to be breaking up, and support for the bill is growing Californias legislators. In the next few days, they will determine the fate of the Heritage Tree Preservation Act. Will your representative take a stand in support of forest protection, or will they let the chainsaws continue cutting down the remaining 1% of our old-growth trees?

Please take a moment right now to call your Assembly Member and ask him or her to support SB 754, the Heritage Tree Preservation Act, to permanently protect the last of Californias old-growth trees. Your legislator needs to hear from you.

Posted by Lisa at 06:07 PM
Last Shot At Saving The California Redwoods Before SB 754 Dies On The Assembly Floor Tomorrow

One last round of letters needs to go out today, if you can manage it.

Don't worry about whether the people on this list are "your assemblymember" -- it is my hope that they all receive letters from all over the world. These are the world's Redwoods being destroyed!


A bill to protect Californias old-growth trees is stuck in a political logjam, and we need your help to get it out!

SB 754, the Heritage Tree Preservation Act, will permanently protect the last of Californias old-growth trees on nonfederal land, including Coast redwoods, Douglas-firs and Giant sequoias. Less than one percent of these ancient giants remain, yet they are still being logged. This bill will protect these strees, standing since before statehood.

Old-growth trees provide essential habitat for endangered species such as the Marbled murrelet and Northern spotted owl, and they are critical to the health of forest ecosystems, shading the forest floor, cleaning the air, and stabilizing streambeds and hillsides.

SB 754s protections for old-growth trees are very close to becoming law. The bill has already passed the State Senate and made it through two crucial Assembly meetings.

But now a handful of timber-friendly Democrats are holding up the bill on behalf of logging interests, who stand to make a killing off these trees. To become law, this bill must go to the Assembly floor by Friday, August 20th. But the moderate Democrats, or Mod Squad, are trying to keep the bill tied up until then.

The good news is that the bill is still alive. The timber industry wanted it dead last Thursday, and that didnt happen. The bad news is that it will die if it isnt sent to the Assembly floor by this Friday, August 20th.

Your phone calls, letters and emails got us this far. Were in the 11th hour. Help us pull through and finally grant our old-growth trees the protection they deserve.

Is your Assembly Member one of the Mod Squad thats holding up protections for ancient trees? See the list below to find out, and call or send a fax to say you want our old growth protected!

Ask them to protect our ancient trees by supporting SB 754.

If your Assembly Member is not on this list, you can still help. Please call or fax these Assembly leaders and ask them to use their power and influence to end the logjam, and sent SB 754 to the floor!

Dario Frommer, Majority Leader and member of the Mod Squad

Posted by Lisa at 12:06 PM
Video Of Redwoods Slaughter In Scotia, California

This video was shot on August 6, 2004 in Scotia, California.

My friend Gregory and I went back up to the redwoods last Friday to document the horrors we had seen the week before. To us, these tree carcasses provide a shining symbol of our own demise. The beginning of the end, if you will. Humans in the future will look back at this time period and wonder how we could have been so careless and stupid. These trees help keep us and the whole planet alive.

Here is a short video we have created to illustrate what's going on up there, and, specifically, what we saw two weeks ago that set us on such a rampage to try to save this forest:

Remember! As of this moment, there is something you can do. Please, wherever you are in the world, write a letter (I've provided text and word files) to the Appropriations Committee supporting SB 754, The California Heritage Tree Preservation Act. The vote is taking place this Wednesday, August 11th.

Here are some stills of what's in the video. Please send off letters to Judy Chu today. I'm going to figure out who else is on the Appropriations Committee so we can all send them letters too. 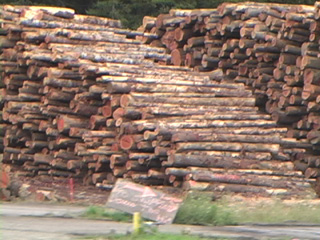 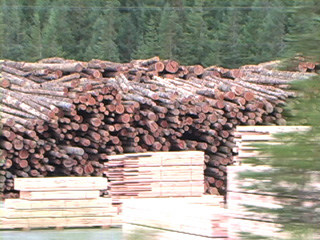 Here's the letter (Text and Word docs of it available here).

Dear Assembly Member Chu and Members of the Appropriations Committee,

I urge your support of SB 754, the Heritage Tree Preservation Act. This bill
has been carefully written to protect some of California's largest and oldest
trees while minimizing impacts to landowners, jobs and state revenues. The
bill minimizes and offsets costs and it preserves revenues to the state from
tourism, recreation and fisheries.

Less than one percent of California's old-growth trees remain standing on
non-federal forestland. SB 754 will protect these trees and the ecological
and economic benefits they bring to our state. Millions of tourists flock
to California's forests each year to witness these towering giants with their
own eyes. The trees protected by this bill are among the oldest, tallest, and
largest living things on earth.

Your name and address here

Posted by Lisa at 09:56 AM
Send A Letter To Save The Ancient California Redwoods

I called the Assembly Appropriations Committee last week to check on the vote, and it turns out that the vote was pushed forward to August 11th. That means we have a few more days to send letters.

I know this is short notice, but it's pretty self explanatory and will only take a second! Thanks for helping out!

I was driving through the Northern California Redwoods last weekend when I came across a horrific site: miles and miles of new lumbermills spawning stacks upon stacks of freshly-killed ancient redwood trees. Some of the trees in these piles were so huge that they must have been 1,000's of years old.

My friend and I came home and immediately began to research this issue, and it turns out that there is a bill, The California Heritage Tree Preservation Act (SB 754), that is being voted on tomorrow (August 4th) by California's Assembly Appropriations Committee. This isn't an impossible task as it has already cleared a major hurdle on June 14 with the approval of the Assembly Natural Resources Committee by a 7-3 vote.

If passed, the bill will protect many species of "heritage trees" on non-federal forestland in California. (Heritage Trees are older than California, which became a state in 1850, and must also meet specific diameter requirements.)

SB 754 would also grant property owners and their heirs the benefit of substantial reduction in estate taxes. This fact alone would help keep many old-growth trees standing, since they wouldn't have to be cut down and sold to meet tax obligations.

Here's a letter (Text) (Word) that you can FAX and email if you want to help swing tomorrow's vote.
(Please do both.)

Dear Assembly Member Chu and Members of the Appropriations Committee,

I urge your support of SB 754, the Heritage Tree Preservation Act. This bill has been carefully written to protect some of California's largest and oldest trees while minimizing impacts to landowners, jobs and state revenues. The bill minimizes and offsets costs and it preserves revenues to the state from tourism, recreation and fisheries.

Less than one percent of California's old-growth trees remain standing on non-federal forestland. SB 754 will protect these trees and the ecological and economic benefits they bring to our state. Millions of tourists flock to California's forests each year to witness these towering giants with their own eyes. The trees protected by this bill are among the oldest, tallest, and largest living things on earth.

Your name and address here

Thanks to the
Bay Area Coalition for Headwaters for the great information and sample letter.

Posted by Lisa at 07:45 PM
Recent Entries in Adventures In Hacktivism - Save The Redwoods
SB 754 Didn't Pass -- Two Votes Short
SB 754 Lives! - Time To Make One Or Two More Phone Calls To Push This Thing Through
Last Shot At Saving The California Redwoods Before SB 754 Dies On The Assembly Floor Tomorrow
Video Of Redwoods Slaughter In Scotia, California
Send A Letter To Save The Ancient California Redwoods