This contains the "Military-Industrial Complex Speech" by Dwight D. Eisenhower in 1961.

Andy Rooney's really a stand up guy! One of the few on television these days to have the courage to tell it like it is.

Video - Andy Rooney On The Military Industrial Complex Taking Over The U.S. (6 MB)

Dwight D. Eisenhower:
"We must guard against the aquisition of unwarranted influence, whether sought or unsought, by the military-industrial complex. The potential for the disasterous rise of misplaced power exists, and will persist." 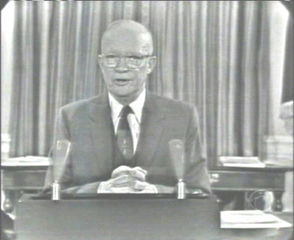 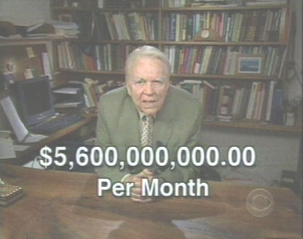 
I'm not really clear about how much a billion dollars is. But the United States, our United States, is spending five billion, six hundred million dollars a month ($5,600,000,000.00) fighting this war in Iraq that we never should have gotten into. We still have 139,000 soldiers in Iraq today. Almost 2,000 Americans have died there. For what?

Now, we have the hurricanes to pay for. One way that our government pays for a lot of things is by borrowing from countries like China. Another way the government is planning on paying for the war and the hurricane damage is by cutting spending for things like medicare perscriptions, highway construction, farm payments, Amtrak, national public radio, loans to graduate students. Do these sound like things you'd like to cut back on to pay for Iraq?

I'll tell you where we ought to start saving, on our bloated military establishment. We're paying for weapons we'll never use. No other country spends the kind of money we spend on our military. Last year, Japan spent $42 billion dollars, Italy spent $28 billion dollars, Russia spent only $19 billion. The United States spent $455 billion. We have 8,000 tanks, for example. One Abrams tank costs 150 times as much as a Ford stationwagon. We have more than 10,000 nuclear weapons. Enough to destroy all of mankind. We're spending $200 million dollars a year on bullets alone. That's a lot of target practice.

We had a great commander in WWII, Dwight Eisenhower. He became President, and on leaving the White House in 1961 he said this:

"We must guard against the aquisition of unwarranted influence, whether sought or unsought, by the military-industrial complex. The potential for the disasterous rise of misplaced power exists, and will persist." 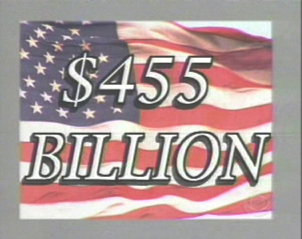 Video Parts One and Two

Posted by Lisa at 05:12 PM
Clips On New Orleans From CNN

Here are some clips from CNN that ran this afternoon (September 4, 2005).

(Hopefully I'll get some more up tonight, but now I want to get 60 min and meet the press up first, now that these are up.)

1. The Mayor of New Orleans blaming the Bush Administration for not providing proper assistance.
(video, MP3)

3. A general overview of the situation down there. (But note that today's 60 Minutes program** challenges the allegation that the levees broke, giving the alternative explanation that it was two or more of the city's 2 feet thick floodwalls that actually gave way.
(video, MP3)

(**This 60 minutes includes in interview with Al Naomi, who manages Flood Control for the Army Core of Engineers.)
(video, MP3)

Posted by Lisa at 10:22 PM
One Of Tom DeLay's Scandals Covered On 60 Minutes

Tom Delay vs. the Austin, TX District Attorney
Mirror of these clips 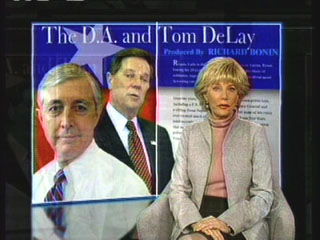 It's really interesting to me to watch the Repubs strategy in action: break the law however you need to, challenge the laws themselves, and wait a couple years until a good judge has a chance to set things straight.

Oh yeah, don't forget to call them an "activist judge" when they use their skill and conscience to interpret the law accordingly.

By that time, you've already won the election, or passed the faulty legislation, or redistricted precincts or completed whatever short term goal you were after. The courts will never, ever be able to keep up the pace after you.

In this case, DeLay is challenging what is meant by "Administrative" costs. He is being investigated for allegedly using funds for other purposes than they were legally allowed to be used.

"Administrative" uses have always meant rent, power, phone bills, etc.
According to his own brochures, he was clearly using the money for other purposes.

Note that this particular "scandal" is different from the numerous other misallocations of funds that DeLay has alredy been admonished for by a congressional ethics committee, or the other recent stuff that just surfaced about taking a vacation on a lobbyist's wallet.

This story is about the Shrub Administrations efforts to hide thousands of American deaths and casualties of this war by simply not reporting them, claiming they are "non-combat injuries." The families of dead soldiers and shell shocked soldiers who have lost limbs/become paralyzed/will never be the same again are pretty upset about it.

Posted by Lisa at 08:53 AM
60 Minutes Explains How Electronic Voting Machines Are Inherently Insecure

I'm not sure why they waited so long to put this out there, but I didn't want to waste any time bringing it to you.

It's available as two smaller 18 MB files, and one large 37 MB file.

Sorry the reception was so bad. It's almost as if someone was purposefully jamming the transmission. (Said wearing tinfoil had :-)

Ben Barnes claims he pulled strings to get the Shrub out of Vietnam.

Wish I had time for more details, but I'm just trying to get some posts up today before I finish moving and take off to europe again for a few weeks...

Man oh man am I pissed. The greatest 60 minutes ever got bumped tonight while they all got together to kiss Reagan's butt for 60 minutes. Damn.

Listen to the show that was supposed to air tonight:


"An FBI whistleblower says that the unit translating information from terrorism suspects deliberately slowed the process; America's power elite and Yale's Skull and Bones Society; the frailty of fingerprint evidence."

That FBI translation story and the skull and bones story better air next week!

Somewhere in the afterlife, Reagan is laughing...

Posted by Lisa at 09:02 PM
The Daily Show Covers Bob Woodward On 60 Minutes

This goes with this 60 minutes program.

This piece details, among other things, the Shrub's secret allocation of 700 million dollars to Tommy Franks for his "secret" war plans that were in place in early 2002.

Smaller files and highlights on the way...

This is all water under the bridge now, because we know now that she already testified. But I thought this would still be interesting to in retrospect.

Richard Clarke, former top advisor on Counterterrorism for the Shrub, Clinton Terrorism Czar, and an appointed expert for both Daddy Shrub and Reagan, has written a book Against All Enemies that exposes a number of different things going on over at the old White House during the days after 911.

I've made the files available in one and four parts.

Former Shrub Treasury Secretary Paul O'Neill was the major source for the book The Price Of Loyalty.

I've made the files available as a single download or in three smaller parts.

Inside The Bush White House

Posted by Lisa at 09:00 AM
60 Minutes Exposes Halliburton's Fake Subsidiary In The Caymans

This piece is riveting from beginning to end. Don't miss a second of it.

I've made the files available as a single download or in three smaller parts.

Leslie Stahl is my new hero. She's been taking her responsibility of reporting for one of the best rated news programs in the United States very seriously by going out of her way to fill us in on things we need to know about what the Shrub Administration and its good friend, Corporate America, have been up to lately. Specifically, doing things behind our backs with our own money.

And it's not pretty. In this piece, we learn that virtually anyone in the U.S. with a pension plan could unknowingly have their money invested in one of several "terrorist" countries.

Turns out that the reason companies like Halliburton, GE, and Conoco are allowed to do business with these "terrorist" driven countries to begin with, is that they have operations located in the Cayman Islands.

So Leslie goes to the Cayman Islands to check out Halliburton's offices there, but it turns out that Halliburton's Cayman island office doesn't really exist. Not a single employee of Halliburton actually works there and all of the mail is re-routed to Texas. (Leslie sneaked in a hidden camera to interview the manager of the bank in the Caymans where Haliburton rents space to find all this out.)

The hidden camera gets some priceless footage of the bank president explaining that a lot of American companies do this, and some of them actually do hire people to sit in the office and push paper, and others (such as Halliburton) don't.

This story was produced by Richard Bonin and Adam Ciralsky.


When President Bush said "Money is the lifeblood of terrorist operations," did it ever occur to you that the money he's talking about is, in large part, yours, mine, and every other American's?

Turns out, just about every one of us with a 401K, pension plan, or mutual fund, has money invested in companies that are doing business with so called "rogue states."

In other words, there are U.S. companies that are helping drive the economies of countries like Iran, Syria, and Libya, that have sponsored terrorists.