This is right before Ben Hammersley's Talk At Etech 2003.
Movie of this. 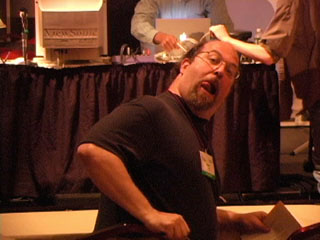 I didn't realize I hadn't posted this yet. Sorry about that!

(Everyone else's stuff seems so much more interesting than my own :-)

This is just me talking about how I got involved with Brewster and the Internet Bookmobile on its maiden voyage to the Eldred Argument in Washington DC. 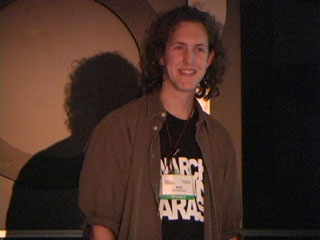 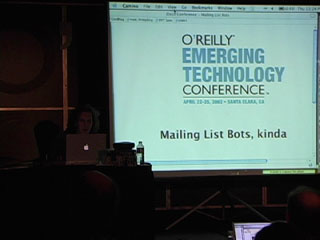 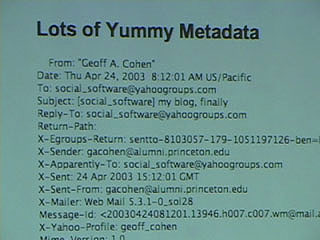 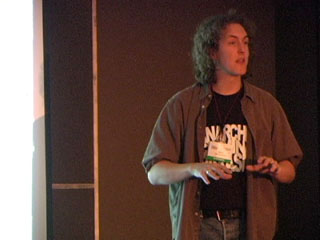 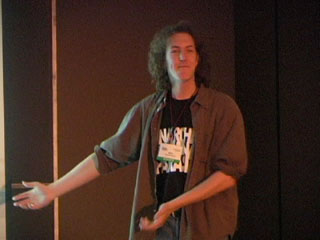 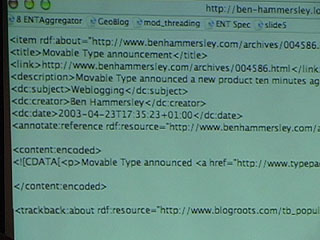 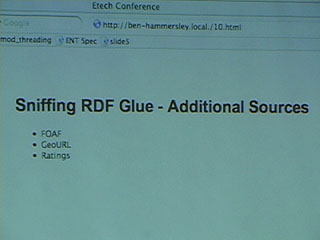 Here is complete audio and video footage of the Warblogging panel at Etech 2003.

There's web-sized video in two parts and three parts, and MP3s of the audio in three parts.

This was easily one of the week's most riveting panels.

Descriptions go with the photo directly below them.

Crowd shot. (Robert Kaye and Joey deVilla in the middle there.)

Posted by Lisa at 07:53 AM
Video, Audio and Photos From Howard Rheingold's Etech 2003 Presentation

Okay so I won't hold up the rest of these clips waiting for the tour pages.

I've still got the rest of ETech to do, then I'm going back to my Spectrum Conference and SXSW 2003 footage.

Here's the Howard Rheingold Etech 2003 presentation. The tour page will go up in a day or so.

I've broken down some of these files for easier download over slower connections.

Confession time: I didn't even know who Alan Kay was until a week ago.
(Bio 1, Bio2.)

Now my mind is forever changed.

For this reason, it became important to me to preserve this presentation so that the information and wisdom it contains could be spread to a larger audience.

This page is still very much a work-in-progress, as there are still several names, dates and facts that need to be included. Please feel free to email me with any factoids and links that might serve to enrich the page.

Alan explains what his talk is going to be about: "...a little bit of complaining about where we are and what hasn't happened, pay tribute to a few things that were done a long time ago...(and) show you some ideas about how to make things better.." He also says that hopes to get the audience interested in Squeak so that he can enlist them in the project and that he will be previewing some alpha software at the end of his talk that he's really excited about.

(Note that this is a new link I've just put up for this at http://www.lisarein.com/alankay/tour.html -- there were some problems with the other link. Let me know that this is working ok guys!)

Posted by Lisa at 07:47 AM
Links To Quicktime Players On Different Platforms

Aaron Swartz was nice enough to download one of my files and test it on Windows, Mac OSX and Linux.

Here are links to the players that could run the files.

Aaron downloaded http://www.lisarein.com/videos/tvclips/dailyapril2003/4-02-03-shilling-sm.mov and tested it:

Win: Should work in QuickTime and VLC
http://videolan.org/vlc/download-windows.html.

Posted by Lisa at 08:26 AM
Yes I Did Get Alan Kay's Etech Presentation!

So the question of the day seems to be "did I get the incredible Alan Kay presentation that happened Thursday morning at Etech?"

And yes, it WAS absolutely incredible (as you will soon be able to see for yourself)!

I was even able to capture both perspectives (Alice and the Bunny) during the VR demo, and get great close-ups (with direct sound) of all of the historical movies of past interfaces from the 60s!

It's the first presentation I'll be getting up later today!

(After Part Two and the Hi-res versions of Howard Rheingold's Keynote go up.)

Posted by Lisa at 08:15 AM
Video - First Half Of Howard Rheingold's Keynote At Emerging Technologies 2003

I haven't had a chance to post much this week because I've been at Oreilly's Emerging Technology Conference.

So far I've recorded both keynotes (Howard Rheingold and Alan Kay), the bookmobile presentation by Brewster Khale and myself, Ben Hammersley, a DRM panel, a warblogging panel, and I'm about to grab Mitch Kapor talking about his newest software endeavor.

I lost my powercord early on in the conference and that has really cramped my already-impossible production schedule.

However, I did manage to get half of Howard Rheingold's talk ready for viewing and uploaded.

I may get something else up tonight, but otherwise you'll have to wait for the weekend for the goodies!

Half of Howard Rheingold's Keynote At Emerging Technologies (Small - 30 MB)

Posted by Lisa at 03:31 PM
Come See Me And The Internet Bookmobile At Emerging Technologies 2003

I will be presenting with Brewster Khale this Wednesday afternoon from 3:45-4:30 in the Lafayette/San Tomas/Lawrence room at Emerging Technologies Conference going on all week in Santa Clara.

Here's a short film I've just put together of the Internet Bookmobile's first stop of its first voyage.